A Great Strategy for Weight Loss: Use a Smaller Plate 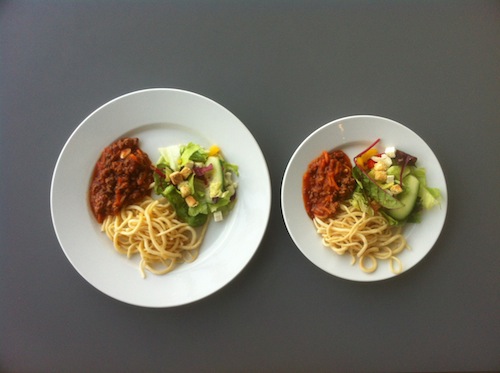 Introduction
One of the key reasons why the average American eats more than 500 calories per day in 2013 than in 1970 is increased portion sizes. For baby boomers it is really obvious when they think back to the size of popcorn containers sold in movie theaters in their youth compared to today, the same is true for virtually every type of food sold.

Portion sizes have increased in restaurants, packaged foods, and on our dinner plates. Food companies have long known that people want to get value for their money and simply giving consumers more food is the easiest way to keep people coming back to a restaurant or a food product.

One of the key strategies for weight loss or control is practicing effective portion control as it leads to calorie control. A new study shows that simply reducing the size of dinnerware can be an effective strategy for portion control. This had been known in adults, but this new study shows that children are especially influenced by plate size. Bigger plates lead to more calories consumed. Smaller plates lead to fewer consumed calories.

Background Data:
Research has clearly demonstrated that adults will eat more food when more food is put in front of them, and yet feel no more satisfied than if they ate less. In other words, your eyes play a significant role in telling your brain how much food you need to eat in order to feel full. When you pile large portions of food on a big plate, you won’t tend to feel full until you have eaten much more food than if you were to put smaller portions of food on a smaller plate. Reducing the size of your plate can help!

New Data:
In adults, dishware size has been clearly shown to influence self-served portion sizes and calorie intake, but whether the same is true in children was not known until a new study was published in the journal Pediatrics. The study used 41 first-graders in a Philadelphia elementary school to test whether adult research on dishware size and food intake also holds true for children.

Obesity in children is a growing problem in the United States. About 17 percent of children aged 2 to 19 are obese, according to the U.S. Centers for Disease Control and Prevention. Using age and size appropriate dinnerware may be an effective strategy to reduce the consumption of excess calories.

In the study, children served themselves using child- or adult-sized plates and bowls. The adult-sized dishware was about twice as large as the child-sized. Each child participated in two trials of each dishware type and entrée type (amorphous [pasta] or unit [chicken nuggets]) during 8 lunches at school.

The results of the study showed that 80% of children served themselves about 90 more calories at lunch when using adult-size plates and bowls compared to the child-sized versions.

The practical implications of the results are clear, to reduce calorie intake kids (and adults) should use smaller dishware.

Commentary:
Portion control can take some time to master, but it is a skill that is completely necessary for long term weight control. The absolute best strategy that I know of to make portion control easier is using PGX – the revolutionary dietary fiber matrix (click here for more information). Five grams of PGX will hold about one liter of water as it passes through the stomach and small intestine. Since most people’s stomachs holds about 2 liters of water, a 5 gram serving of PGX prior to your meal will allow you to easily cut your portion sizes in half and still have the sensation of feeling full. Plus PGX exerts many other benefits.

PGX is safe for children when used in granule form or in one of the powdered drink forms. Simply reduce the dosage from 5 grams before meals to 1-2.5 grams depending upon the child’s size.