Maybe Nuts are Not a High Calorie Food After All 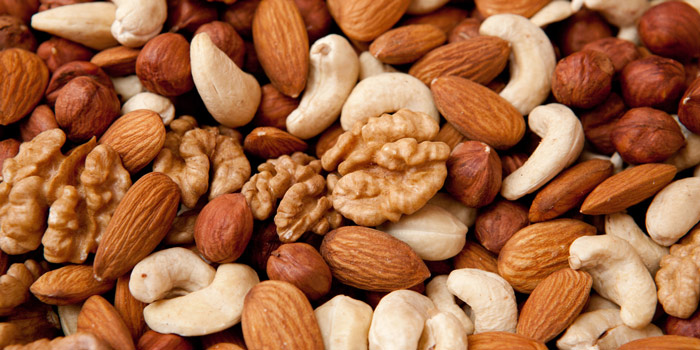 Nuts and seeds are rich in nutrients and phytochemicals, but they are also high in fat. So, many people avoid nut consumption out of fear that it will counteract their efforts to achieve or maintain their ideal body weight. Large population studies have shown that the people who consumed the most nuts were less obese. A new study from the UK’s Institute of Food Research indicates that although almonds contain more than 50% fat, the fatty acids are not easily digestible or absorbable. Perhaps they are not as calorie dense as we previously thought.

It has been previously shown that nuts produce two key effects that help fight obesity:

Nonetheless, it seems counterintuitive to many that such a high calorie food would actually fight obesity. It has been suggested that nuts may not be as high in absorbable calories as previously thought. Researchers have primarily looked at the absorption of almonds as an example. Studies have shown that even after thorough chewing, a high proportion of the fat remains encapsulated in the cells of the chewed almond tissue and is therefore less available for digestion. This effect is easily measured by examining the rise in fats in the blood after consumption of almonds. It is thought that the calorie content of almonds, and perhaps nuts in general, is overestimated by about one-third.

The particle size and structure of chewed almonds has a significant impact on nutrient release (bioaccessibility) and digestion. The goals of this new study were to quantify the effects of chewing (mastication) on the bioaccessibility of the fats of almond and examine microstructural characteristics of masticated almonds.

In the study, 17 healthy subjects chewed raw natural almonds (NAs) or roasted almonds (RAs) in 4 separate sessions. After chewing thoroughly, subjects spit out the food bolus so that researchers could measure the particle size using mechanical sieving and laser diffraction. The microstructure of masticated almonds, including the structural integrity of the cell walls, was examined with microscopy. The bioaccessibility of the fat was predicted by using a theoretical model, based on almond particle size and cell dimensions, and then compared with empirically derived data.

Results showed that the bioaccessibility of fat from the almonds masticated by the human volunteers was approximately 8% and 11% for NAs and RAs, respectively. This low percentage of fat bioaccessibility is attributable to the high proportion (35-40%) of large particles (>500 μm) in masticated almonds. Microstructural examination of the almonds by microscopy indicated that most of the fat remained undisturbed in intact cells after mastication.

These results indicate that almonds have a much lower calorie content than previously thought due to 90% of the fat in almond not being absorbed.

This study adds to the growing list of studies highlighting that frequent nut consumption makes sense in improving nutrition and promoting health. In addition to the reduced risk of obesity with nut consumption, numerous large studies have also found that higher nut consumption is also associated with a protective effect against cardiovascular disease and type 2 diabetes.

Key takeaway point – eat a moderate amount of nuts each day. About ¼ of a cup or a small handful is all that you need to see the health benefits. I would still recommend that you keep the portion size moderate and don’t overdo it.