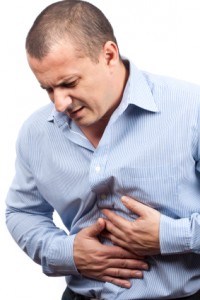 Gallstones are round or oval, smooth or faceted lumps of solid matter found in the gallbladder (the sac under the liver where bile is stored and concentrated). Gallstones may be without symptoms or may be associated with periods of intense pain in the abdomen that radiates to the upper back. Symptoms begin only when a gallstone gets stuck in the duct leading from the gallbladder to the intestine. An ultrasound exam provides definitive diagnosis of gallstones.

Gallstones arise when there is an imbalance among the bile components. Bile is composed of: bile salts; bilirubin; cholesterol, phospholipids, and fatty acids; water; electrolytes; and other substances. The most common stones are mixed, containing cholesterol and its derivatives along with varying amounts of bile salts, bile pigments, and inorganic salts of calcium. The required step in mixed stone formation is elevations of cholesterol within the gallbladder. The solubility of bile is based on the relative concentrations of cholesterol, bile acids, phosphatidylcholine (lecithin) and water. Since free cholesterol is water-insoluble, it must be incorporated into a lecithin-bile salt mixture. Either an increase in cholesterol secretion or a decrease in bile acid or lecithin secretion will result in the bile becoming supersaturated with cholesterol. Once the bile is supersaturated with cholesterol, it sets the stage for any particulate matter to begin attracting the cholesterol and initiate stone formation.

A low fiber diet is one of the main causes of gallstones. Such a diet, high in refined carbohydrates and fat and low in fiber, leads to a reduction in the synthesis of bile acids by the liver and a lower bile acid concentration in the gallbladder. Thereby, significantly reducing the solubility of the bile. A high intake of refined sugar is also a risk factor for gallstones.

The frequency of gallstones is two to four times greater in women than in men. Women are predisposed to gallstones because of either increased cholesterol synthesis or suppression of bile acids by estrogens. Pregnancy, use of oral contraceptives, or other causes of elevated estrogen levels greatly increase the incidence of gallstones. Obesity is also associated with a significant increased risk for gallstones.

What dietary factors are important in Gallstones?

For prevention and treatment of gallstones, increase intake of vegetables, fruits, and dietary fiber, especially the gel-forming or mucilaginous fibers as found in flaxseed, oat bran, guar gum, and pectin; reduce consumption of saturated fats, cholesterol, sugar, and animal proteins; avoid all fried foods; and drink at least 6 eight-ounce glasses of water each day to maintain the proper water content of the bile.

Radishes increase the flow of bile helping to maintain a healthy gallbladder, however individuals with gallbladder disease should not consume large amounts of this vegetable.

Food allergies have long been known to trigger gallbladder attacks. A 1968 study revealed that 100 percent of a group of patients with gallstones were free from symptoms while they were on a basic elimination diet (consisting of beef, rye, soybean, rice, cherry, peach, apricot, beet, and spinach). Foods that induced symptoms of gallstones, in decreasing order of their occurrence, were egg, pork, onion, fowl, milk, coffee, citrus, corn, beans, and nuts. Adding eggs to the diet caused gallbladder attacks in 93 percent of the patients. Note: Coffee (both regular and decaffeinated) induces gallbladder contractions, so if you have gallstones, avoid coffee until the stones are resolved.

Achieving ideal body weight is an important goal in the treatment and prevention of gallstones. Obesity causes an increased secretion of cholesterol in the bile as a result of increased cholesterol synthesis. It is important to recognize that during active weight reduction, bile cholesterol saturation initially increases. The secretion of all bile components is reduced during weight loss, but the secretion of bile acids decreases more than that of cholesterol. Therefore, it is a good idea for people on weight-loss programs to support liver function with high-fiber foods and plenty of liquids. Consumption of 6-to-8 glasses of liquids is necessary each day to maintain the water content of bile. Pure water or fresh fruit and vegetable juices are the preferred ways to meet your body’s water requirements.

Once the weight is stabilized, bile acid output returns to normal levels while the cholesterol output remains low. The net effect of weight loss is a significant reduction in cholesterol saturation.

What nutritional supplements should I take for Gallstones?

Liver Health from Natural Factors provides a collection of compounds that work synergistically to support the liver and gallbladder. Take one to two capsules with meals three times daily.

Peppermint Oil Complex with Oregano Oil from Natural Factors provides volatile oils from peppermint, oregano, and caraway seed oil in an enteric-coated capsule so that it does not break down in the stomach but is instead delivered to the small and large intestine. A natural terpene combination (menthol, menthone, pinene, borneol, cineole, and camphene) has demonstrated an ability to dissolve gallstones in several studies. The natural terpene combination (Rowachol®) is not available in the United States at this time. However, as menthol is the major component of this formula; enteric-coated peppermint oil (which is available in the U.S. marketplace) may offer similar benefits. The dosage is 1-2 capsules (0.2 ml/capsule) three times per day between meals.

Reduction in the frequency of gallbladder attacks and the dissolution of gallstones as determined by ultrasound are the telltale signs if this protocol is working for you.