DPA – The Missing Omega-3 for Health and Wellness

Much of the research and attention on fish oils has focused on the omega-3 fatty acids eicosapentaenoic acid (EPA, C20:5n3) and docosahexaenoic acid (DHA, C22:6n3), but a burgeoning body of new science is now indicating that the third most prevalent very long-chain omega 3 fatty acid in fish oil, docosapentaenoic acid (DPA, C22:5n3), is also critical to human health. It definitely possesses some unique benefits.

So, why has DPA been missing? The simple answer is that popular manufacturing processes (e.g., molecular distillation, super critical fluid extraction, column separation, etc.) concentrate EPA and DHA, but at the expense of DPA. That issue has recently been resolved via a superior manufacturing method that separates molecules not only by their weight, but also by their polarity or electrical charge. For example, the Targeted Molecular Enrichment Technology not only preserves DPA levels, but also provides unparalleled removal of lipid peroxides, heavy metals and persistent organic pollutants to produce the purest fish oils on the planet.

The Central Role of DPA in Omega-3 Metabolism

DPA plays a central role in regulating the use of EPA and DHA in the human body. In addition to being absorbed into the body through dietary sources, DPA is also converted in the body from EPA by an enzyme that adds two carbon units and DPA can also be converted back to EPA or it can be converted to DHA. In fact, many of the benefits noted with EPA supplementation appear to be due to increased conversion to DPA. It looks like since DPA serves as the intermediate in the conversion of EPA to DHA, it acts as reserve for both DHA and EPA – as dietary intake of DPA increases the tissue levels of both DHA and EPA increase. Without question, DPA is equally as important as EPA and DHA, and there is data that suggests it is an absolute required component of any fish oil supplement. Consider the following:1,2
• DPA can be uniquely retro-converted back to EPA, as well as converted to DHA, as the body requires.
• DPA supplementation increases tissue levels of both DHA and EPA.
• Even though dietary intake of DPA is approximately half that of EPA in salmon and other fish, DPA is preferentially concentrated over EPA in the blood.
• DPA levels in red blood cells greatly exceed EPA levels; in fact, more than double that of EPA.
• One reason of higher DPA levels in the body compared to EPA and DHA is DPA is less actively oxidized (burned as energy). Instead, it highly valued by the body and stored in body tissues. 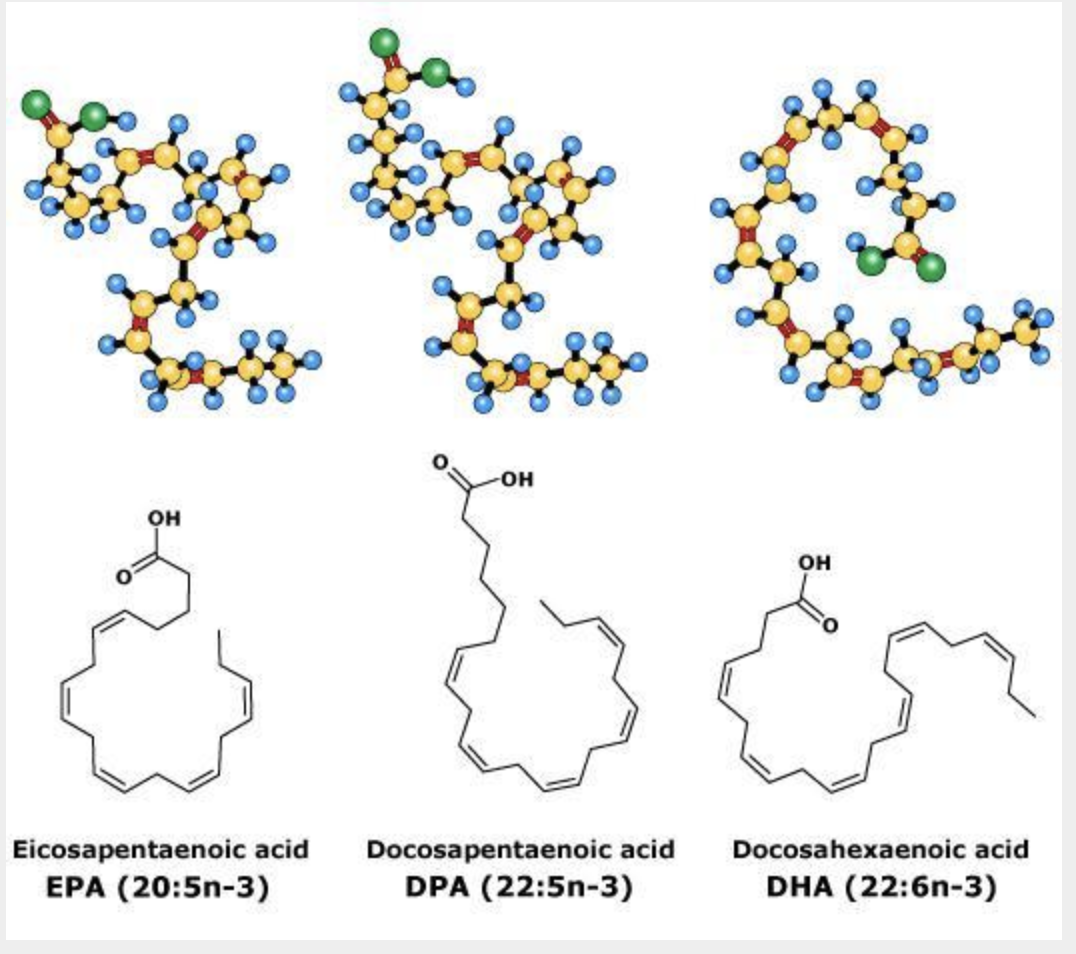 What are the Benefits of DPA?

Separating out the health benefits of DPA from EPA and DHA is a bit complicated because there is so much interrelationship between these omega-3 fatty acids, but the story that is emerging is showing quite convincingly how important DPA is to the total benefits of fish oil supplementation.1,2 It is critical to point out that it is easy to think that these molecules exert the same effects. That is not quite true. They especially differ on their effects on cell membranes.3 Quite simply, they differ because they have different shape due to the number of double bonds and length of the molecule. As a result, each omega-3 fatty acid exerts a distinct molecular organization when taken up into a phospholipid within the cell membrane. The high disorder produced by the omega-3 fatty acids within the cell membranes exert significant physiological benefits that explain the differences in health benefits of EPA, DHA and DPA. They key point is that they are not equivalent in their interactions within membranes, which also means there is likely differences in clinical efficacy among the omega-3 fatty acids. Though, with DPA keep in mind that it acts as a reservoir for both EPA and DHA.

One of the most obvious lines of evidence supporting the importance of DPA’s contribution to the health benefits of fish oils is that it comprises approximately 40% of the long-chain omega-3 fatty acids in mother’s milk.4 Clearly, nature intends it to play a big role in proper development.

There are also the population-based trials that have demonstrated that higher levels of DPA in human blood are associated with lower blood triglycerides, cholesterol, inflammation, and overall risk of coronary heart diseases. In one large study of older adults, higher circulating levels of DPA were associated with lower total mortality, including death from coronary heart disease.5 On the flipside, several studies have shown that patients with heart disease have significantly lower DPA levels than healthy individuals. In fact, in the Edinburgh Artery Study, a cross-sectional survey of more than 1,500 people, DPA was the only omega-3 fatty acid that reduced the likelihood of developing atherosclerosis.6 And, an even larger assessment comprising 19 studies and 45,637 individuals only DPA was associated with a lower risk of total coronary heart disease.7 The other omega-3 fatty acids were not.

How is DPA producing these benefits? More than likely it is a combination of effects has it does have some lipid modifying effects, prevents excessive platelet aggregation, and certainly reducing vascular inflammation is a central factor.

There are several possible explanations as to why DPA is able to reduce vascular inflammation and prevent atherosclerosis. Consider the following:
• DPA leads to the production of its own anti-inflammatory molecules known as “resolvins” and “protectins.”
• DPA may be more effective than either EPA or DHA in reducing C-reactive protein and other markers of inflammation.
• DPA is more effective than EPA or DHA in inhibiting platelet aggregation, a key factor in the development of atherosclerosis.
• DPA enhances EPA’s ability to repair damaged blood vessels.

Let’s take a more in depth look at each of these mechanisms. First, one of the interesting downstream metabolites of omega-3 fatty acids are compounds known as resolvins and protectins. Resolvins are given that name because of their ability to resolve inflammation while protectins protect against inflammation from ever starting. Resolvins (Rv), protectins (PD) and another class of compounds, maresins (MaR), are now termed specialized pro-resolving mediators (SPMs).

The discovery of SPMs has helped understand why fish oil supplementation reduces inflammatory conditions and promote true healing. The different omega-3s give rise to different series of resolvins. EPA gives rise to the E series: DPA and DHA the D series. There is emerging data that the DPA-derived resolvins and protectins exert more significant effects. This has been demonstrated on the vascular endothelium, lining of the intestines, and systemically. DPA may hold the key to preventing and resolving inflammation.9

C-reactive protein is a well-known biological marker of inflammation. In the classic response to injury or infection, the injured area becomes red, swollen, hot and painful. But, there is another type of inflammation that is not so obvious. This silent inflammation reflects an underlying low-grade stimulation of the inflammatory process with no outwards signs of inflammation. Silent inflammation is a major factor in the development of virtually every major chronic degenerative disease including cardiovascular disease (CVD), type 2 diabetes, cancer, and Alzheimer’s disease. High sensitivity C-reactive protein (hsCRP), a blood marker that reflects different degrees of inflammation, has been identified as an independent risk factor for CVD. In fact, it is about 4 times more significant that measuring LDL-cholesterol.

DPA appears to exert significant effects in reducing both CRP and blood triglyceride levels. One group of researchers evaluated whether n-3 DPA content of red blood cells (RBC) influenced CRP and triglyceride levels if subject took an omega-3 supplement. The study was divided into two separate studies. Study 1enrolled 115 subjects, aged 20-44 years, body mass index (BMI) 20-30 kg/m2, TG = 34-176 mg/dL; Study 2 enrolled 28 subjects, aged to two 22-65 years, BMI 24-37 kg/m2, TG = 141-339 mg/dL). The dose-response effects of n-3 fatty acid supplementation on RBC n-3 DPA after five months of supplementation with over-the-counter omega-3 triglycerides (Study 1: 0, 300, 600, 900, and 1800 mg/day EPA + DHA) and eight weeks of prescription omega-3 ethyl esters (Study 2: 0, 850, and 3400 mg/day EPA + DHA). In both studies, RBC levels of DPA were inversely correlated with CRP and with fasting triglycerides. In other words, the higher the DPA content in RBCs, the lower the CRP and triglycerides. The only shortcoming of the study was using fish oils with low levels of DPA. Even so, both groups saw DPA levels rise.

DPA Prevents Platelets from Becoming “Stick”
DPA also exerts more favorable effects on platelets compared to EPA and DHA. Platelets are tiny blood cells that help your body form clots to stop bleeding. If one of your blood vessels gets damaged, it sends out signals that are picked up by platelets. The platelets then rush to the site of damage and form clot to help repair the damage. However, if the platelets are too “sticky” and easy to aggregate it is a problem. Excessive platelet aggregation, like CRP, is another independent risk factor for heart disease and stroke. Once platelets aggregate, they release potent compounds that dramatically promote the formation of the atherosclerotic plaque, or they can form a clot that can lodge in small arteries and produce a heart attack or stroke. The adhesiveness of platelets is determined largely by the type of fats in the diet and the level of antioxidants. While saturated fats and cholesterol increase platelet aggregation, omega-3 fatty acies (both short-chain and long-chain) and monounsaturated fats have the opposite effect. Among the long-chain omega-3 fatty acids it appears DPA exerts the most favorable effects in inhibiting excessive platelet aggregation.11

DPA also exerts some influence on improving metabolism by activating enzymes and genes with the overall effect being to promote the burning of fat and turning down excessive inflammation. The overall effect may help promote improved body fat composition and weight loss. The body conserves DPA as it is less likely to be burned as fuel compared to other fatty acids. The body seeks to preserve the important physiological roles played by this important molecule.1,2,12

Higher blood levels of DPA during pregnancy is associated with a lowered risk for postpartum depression.13 DPA has also been linked to positive mechanism that lead to better overall mental health and cognitive function. Some of these effects are likely produced by DPA, but research indicates DPA enhances DHA’s ability to:1,2
o Promote cognitive development from conception through the critical first 2 years of life (DHA is the structural omega-3 fat of the brain)
o Slow cognitive decline as we age
o Reduce the risk for mental health & mood disorders
o Support optimal eye health

Final Comments
How much DPA is required for daily supplementation? First, the DPA intake in Western countries is a woeful 10-40 mg as compared to approximately 2-4 times as much EPA and DHA, respectively, which is also woefully low. Based upon the general recommendation for EPA+DHA and calculating what should be the corresponding amount. For example, many health authorities recommend 1,000 mg of EPA+DHA+DPA daily. That amount would correspond to approximately 100 mg of DPA per day.