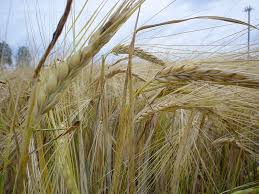 One of the heartiest of the grains, rye is more nutritious than its cousin, wheat. Rye was originally a wild grass found in Central Asia. Traditionally considered food for the poor, rye’s popularity fell as living standards increased in the times of ancient Greece and Rome. However, during this time, rye remained a staple in Germany, Scandinavia and, eastern European nations – where it was appreciated for its nutrition and taste. Although growing in popularity, most rye grown in the United States is used as livestock feed.
Nutritional Highlights:
• Rye is a great source of dietary fiber, phosphorous, magnesium, and, vitamin B1.
• Rye has a 4 to 1 magnesium-to-calcium ratio.

Health Benefits:
• Due to its high fiber content, rye can help prevent spikes in blood sugar, and benefit those with diabetes.
• Rye’s fiber content is also shown to help reduce the symptoms of those suffering from irritable bowel syndrome.
• Rye’s ability to provide extra soluble and insoluble fiber, as well as increase colonic butyric acid production, can help prevent colon cancer.
• As it provides non-cellulose polysaccharides, which has water-binding properties, rye can promote the sensation of fullness and help normalize bowel function.
Rye can be used in place of a variety of grains. Start your day with rye flakes instead of oats for an oatmeal-like breakfast. Or, in place of rice, cook rye berries for a versatile side dish. Rye bread is the most common use of rye, and is great used for sandwiches and toast. Another, less common use, is to supplement rye flour instead of wheat flour to make pancakes, muffins and breads. For information on other grains, take a look at my “Encyclopedia of Healing Facts”.