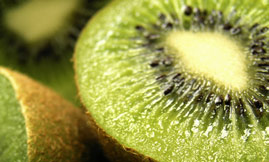 This naturally occurring compound is an essential cofactor in cellular functions and has been found in all plant foods analyzed to date. Parsley, green peppers, kiwi fruit, papaya, and tofu are especially rich sources, containing 2—3 mcg per 100-gram serving. Green tea provides the same amount per 4-oz serving.

What Does PQQ Do?

Studies show that PQQ is a key regulator of cellular function and is capable of neutralizing free radicals to a much greater degree than many other antioxidants such as vitamin C.

When PQQ is omitted from diets in animal studies, it leads to growth impairment, compromised immunity, and abnormal reproductive function. The daily requirement of PQQ seems to be similar to that for folic acid (400mcg). As with other essential nutrients, the immune system seems particularly sensitive to low levels of PQQ.

PQQ for Energy and Anti-Aging

Another key action of PQQ involves mitochondria—the energy producing compartments in our cells. In addition to PQQ’s powerful antioxidant effect, it also promotes thegeneration of new mitochondria within aging cells, a process known as mitochondrial biogenesis. This effect makes PQQ ripe for further study in the anti-aging field.

Current research has focused primarily on PQQ’s ability to protect memory and cognition in both aging animals and humans. Here are some of the effects noted in the animal studies involving PQQ:

3 Tips To Improve Your Memory

NO. 2: Eat blueberries. Blueberries and other berries are rich in plant pigments known as anthocyanidins that have been shown to improve mental function in numerous clinical studies.

NO. 3: Control blood sugar. The brain is critically dependent on a constant and steady supply of blood sugar (glucose). When people are on the blood sugar rollercoaster, it’s difficult to stay focused and concentrate. One supplement that can help even out blood sugar is PGX.