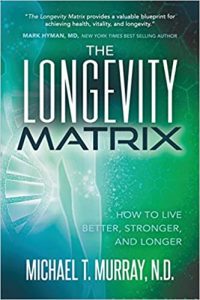 One of the themes throughout my new book, The Longevity Matrix, is that many popular drugs accelerate the progression of age-related diseases and/or increase mortality. They are obstacles to health and longevity. Adding to the large body of scientific evidence supporting this statement is a new study linking certain popular drugs to an increased risk for mental decline and dementia in older adults. The drugs share some common mechanisms within key areas of the brain, but are used primarily as ingredients in over-the-counter sleep, cough and cold, and allergy medicines as well as in the treatment of an overactive bladder, Parkinson’s disease, and depression.

These drugs include diphenhydramine, which is used in many popular products such as Benadryl, Nytol Sominex, Theraflu, Triaminic Allergy, plus many others. Other examples of drugs showing increased risk for dementia are other antihistamines such as chlorpheniramine (Aller-Chlor); drugs used for overactive bladder, such as oxybutynin (Ditropan) and tolterodine (Detrol); and the tricyclic antidepressants, such as doxepin or amitriptyline.

The offending drugs all act to block the effects of acetylcholine, a critical brain chemical involved in the transmission of the nerve impulse and is especially important for proper memory and cognitive function. For example, Alzheimer’s disease is associated with a severe reduction in acetylcholine levels due to reduced activity of the enzyme that manufactures acetylcholine (choline acetyltransferase).

Given the link between low acetylcholine levels and poor brain function, including dementia, previous studies have linked drugs to reduced acetylcholine activity as well as mild cognitive impairment. These drugs include the ones mentioned in the introduction above. While discontinuation of the drugs is thought to reverse the mental deficit, there is evidence that anticholinergic drugs may produce permanent changes leading to irreversible dementia. These drugs are known to cause short-term drowsiness or confusion, which is included in the prescribing information, but the long-term effects these drugs have on mental function are generally not known by physicians or the people taking them.

Other drugs, like sedative hypnotic drugs (sleeping pills), proton pump inhibitors (e.g., Prilosec, Nexium) and even acetaminophen (Tylenol) have also been linked to an increased risk for dementia. All of these types of drugs, both prescription and over-the-counter, are used at an alarming rate by the elderly population putting them at significant risk for dementia.

A teams of researchers led by several from the University of California San Diego School of Medicine, conducted another analysis showing damning evidence that anticholinergic drugs lead to an increased risk of cognitive decline, particularly in those at risk for Alzheimer’s disease (AD).

A total of 688 adults, evenly divided by sex and with an average age of 74, participated in the study. None of the participants displayed cognitive or memory problems at the beginning of the study. Participants were given annual comprehensive cognitive tests for up to 10 years. Use of anticholinergic drugs was also assessed. One-third were taking such medications, with an average of 4.7 anticholinergic drugs per person.

Results showed that cognitively normal study participants who were taking at least one anticholinergic drug at baseline were 47 percent more likely to develop mild cognitive impairment (MCI), often a precursor to dementia, compared to those not taking these drugs.

The researchers also looked at whether participants had biomarkers for AD in their cerebrospinal fluid, such as certain types of proteins, or possessed a well-known genetic risk factor for AD (the APOE ε4 genotype). They found that participants with AD biomarkers who were taking anticholinergic drugs were four times more likely to develop MCI than persons lacking biomarkers and not taking the drugs. And, here was the BIG finding. In the subjects with the APOE ε4 genotype were nearly 2.5 times more likely to develop cognitive impairment than those without that genetic marker who were not taking the drugs.

The lead author of the study, Alexandra Weigand, believes that the anticholinergic drugs increase the risk for AD by acting in a “double hit” manner. In the first hit, AD starts to develop in a small region called the basal forebrain that produces acetylcholine, thereby reducing acetylcholine levels. In the second hit, the anticholinergic drugs further deplete the brain’s store of acetylcholine. This combined effect significantly impairs a person’s thinking and memory.

As a society we need to wake up to the truth about the long-term effects of many of popular drugs. Their use is completely irrational. Why take a drug to relieve relatively minor symptoms only to increase your risk of developing dementia. It just doesn’t make any sense. Identify and address underlying issues with natural approaches versus the whack-a-mole strategy of trying to stamp out symptoms with drug therapy. The Longevity Matrix can help.