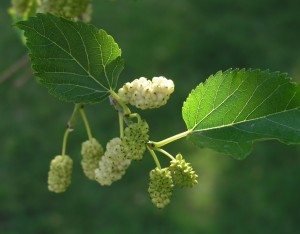 There are lots of herbal weight loss products on the market with most offering little hope, but a lot of hype. However, there are also several with confirmed benefits from detailed well-done clinical trials. Rather than getting seduced by the latest “miracle” product for weight loss that has little (if any) scientific basis, consumers should focus on those natural products with a stronger portfolio of research showing safety and efficacy.

A new study has shown that an extract from the leaves of the mulberry plant (Morus indica) – best known as food for silkworms – provides a range of benefits for those who are overweight. Previous studies have shown that it possesses significant blood sugar lowering effects, as it contains a “sugar blocker” (specifically an alpha-glucosidase inhibitor), along with other compounds that appear to improve blood glucose control as well as blood lipids (cholesterol and triglycerides).

Highly regarded in traditional Chinese and Japanese medicine, previous research centered on its considerable benefits in improving blood sugar control and blood lipids. When patients with type 2 diabetes were given either mulberry dried leaves at a dose of 3 g/day or one tablet of the drug glyburide (5 mg/day) for 4 weeks the following was shown:

In another clinical trial, subjects were given three tablets of 280 mg mulberry leaf three times a day before meals for a period of 12 weeks. At the end of the study, total cholesterol, triglyceride and LDL were significantly decreased by 4.9%, 14.1%, and 5.6%, respectively, from baseline, whereas HDL was significantly increased by 19.7%.

These results and others indicate that mulberry leaf may be of benefit in people who have the metabolic syndrome characterized by glucose intolerance, as well as alterations in cholesterol and/or triglyceride levels.

Given the benefits of mulberry leaves in improving blood glucose control, researchers in Italy conducted a clinical trial to evaluate the effects on weight loss with an extract of white Japanese mulberry (Morus alba) in 46 overweight people who were enrolled and divided into two groups. The subjects were given an identical balanced diet of 1300 kcal then one group (A) received 2400 mg of mulberry extract while the other group (B) received a placebo. Each group was followed-up every 30 days at 30, 60 and 90 days of treatment for measurements of blood chemistry, body weight and waist circumference in all the subjects and thigh circumference in women only were repeated.

In group A weight loss was about 20 pounds in 3 months, equal to approximately 10 percent of the initial weight, significantly higher than the placebo group B. In addition, the plasma insulin and glucose curves in the group getting the mulberry extract were significantly improved.

In the 20 women treated with only low-calorie diet and with placebo, weight reduction was globally of 6.5 pounds, approximately equal to 3 percent of the initial weight; moreover, the blood glucose curves and the insulin curves showed a slight decline compared to baseline, but not so significantly as was the case for group A.

Waist circumference and thigh circumference (in women) decreased in all participants, obviously more evidently in subjects who lost the most weight.

These results show quite clearly that the use of mulberry extract can dramatically accelerate weight loss in dieting subjects and presumably does so by improving blood sugar control.

Mulberry leaf extract is available in a 30:1 concentrate standardized to contain 2% moranoline content from Natural Factors. The recommended dosage is 100 mg two to three times daily. Mulberry leaf extract has no known toxicity, but as the effects during pregnancy and lactation have not been sufficiently evaluated, it is not recommended for use during these times unless directed to do so by a physician. Since mulberry leaf extract improves blood sugar control, individuals on oral hypoglycemic drugs for type 2 diabetes will need to monitor blood sugar levels and work with their physician to adjust drug dosage as needed.

Though mulberry extract is clearly beneficial on its own, I prefer to recommend it in combination with PGX® – the revolutionary fiber matrix. It is available in this combination as WellBetX PGX® Plus Mulberry from Natural Factors. Detailed scientific investigations have shown PGX :