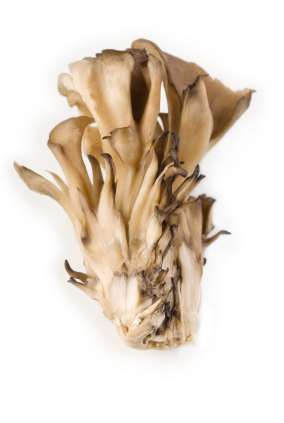 The maitake mushroom (Grifola frondosa) has been recognized as a source of immune enhancing compounds that are being shown to offer significant health benefits.1,2,3 The commercial evolution of maitake has led to the development of MaitakeGold 404®, a proprietary maitake extract developed by Dr. Hiroaki Nanba, one of the world’s leading authorities on maitake.

In the early 1980’s, Dr. Nanba was researching the immune enhancing properties of mushrooms when he discovered that maitake extracts demonstrated more pronounced antitumor activity in animal tests than other mushroom extracts. One of the key benefits of maitake was the apparent ability to be effective when given orally. In contrast, the other mushrooms Dr. Nanba was studying, (such as shiitake) only appeared to be effective when injected into the bloodstream.

Throughout the late 1980’s and 1990’s, Dr. Nanba and his research team continued to study maitake with the goal of refining and improving the activity of his extract. One way to do this discovered by Dr. Nanba was to eliminate an adhering substance, or float, in the extract which he found to inhibit the immune activity. Based on his achievement of improved activity from the successful isolation and removal of this inhibiting substance, on December 29, 1998, the US Patent and Trademark Office awarded to Dr. Nanba US Letters Patent #5,854,404 for his important advance. This patented extract is sold under the brand name MaitakeGold 404®. The extract is considered to have low toxicity and high safety. 9

What are the other effects of maitake beta-glucan/protein extracts on the immune system and how does it fight cancer?

Maitake glucan/protein extracts may exert profound effect on immune function.3-9,10-15 In a nutshell, it appears that the glucan/protein complexes like those found in MaitakeGold 404® actually bind to receptors on the outer membranes of macrophages and other white blood cells including natural killer (NK) cells and cytotoxic T-cells (Tc). The immune cells are very important in protecting against and fighting cancer because they can attack tumor cells directly.*

Just like a key in a lock, the binding of the beta-glucan literally flips white blood cells on and triggers a chain reaction leading to increased immune activity. In addition to increasing the ability of the macrophages to engulf and destroy cancer cells, microbes, and other foreign cells, the beta-glucan binding stimulates the production of important signaling proteins of the immune system such as interleukin-1, interleukin-2, and lymphokines. These immune activators ramp up defenses by activating immune cells.5

Do other sources of beta-glucans provide the same benefits as MaitakeGold 404®?

Beta glucans are found in many other forms. However, the unique branching pattern of maitake beta-glucans makes it one of the ideal sources of the molecules. Beta-glucans from oats and barley for example, tend to form viscous gel. When consumed with a meal, oat and barley beta-glucans act as a good source of soluble fiber in lowering cholesterol and blood sugar levels, but they really don’t have much of an impact on the immune system. Purified beta-glucans from the common baker’s yeast (Saccharomyces cerevisiae) possess similar benefit to maitake beta-glucan extracts, but may not be as well absorbed.

Additionally, MaitakeGold 404® is backed by an unprecedented quality assurance program called the ImmuneActive™ Certificate. Each lot of MaitakeGold 404® is independently tested versus a control using a well established technique to measure phagocytic activity in macrophages (white blood cells). Phagocytosis is understood as one of the most important activities in immunology as it is recognized as the body’s first line of immune defense. Simply put, for an immune support product to be of benefit it must be able to stimulate phagocytosis thereby protecting the body from health challenges for increased health and wellbeing.* 5

Maitake researchers have identified four primary mechanisms by which maitake may fight cancer. 4

Does maitake have any benefit against the human immunodeficiency virus (HIV)?

Yes. In the late 1980’s, Japanese researchers determined maitake beta-glucans enhanced helper T-cells, the target cells of HIV. This was one of the earliest clinical indications that maitake may be a potential treatment for HIV. Since then, test tube studies have shown some promising results in inhibiting HIV. Recently, the effect of the patented 404 extract (the source of MaitakeGold 404®) was studied in 35 HIV-positive subjects for 360 days.

The researchers monitored helper T-cell (CD4+) counts, viral load, symptoms of HIV infection, status
of secondary disease, and subjects’ sense of well-being. Effects on the helper T-cell count and viral load were variable, helper T-cells increased in 20 patients, decreased in 8 patients, and remained
static in four patients. Viral load decreased in ten patients, increased in 9 patients and was static in
two patients. The big change was that 85% of patients reported an increased sense of well-being
with regard to various symptoms and secondary diseases cause by HIV. The researchers concluded
that the maitake glucan-protein complex appears to work on several levels: by direct inhibition of HIV, stimulation of the body’s own natural defense system against HIV, and making the body less vulnerable to opportunistic disease. 23

Can Maitake glucanprotein extracts be used during chemotherapy?

According to preliminary data, maitake betaglucan extracts appear to help reduce the side effects of conventional chemotherapy (and radiation) while at the same time enhancing its effectiveness. In 1994, a group from China published findings from a pilot study on 63 cancer patients reporting a total effective rate against solid tumors at 95% and the effective rate against leukemia higher than 90%.

These preliminary studies need to be followed up by larger, better controlled studies. It appears that such studies are on the horizon as in March 2004 the U.S. Food and Drug Administration approved an Investigational New Drug Application (IND) for researchers to conduct a more detailed study on maitake glucan-protein extracts’ potential effects on breast cancer.

Investigators at Memorial Sloan-Kettering Cancer Center, in collaboration with The New York Presbyterian Hospital-Weill Medical College of Cornell University, hope to determine whether maitake extract has any side effects or toxicity and if it can stimulate the immune system. The extract
will be evaluated in women with breast cancer in a phase I/II study. The extract being used in the study is produced under U.S. Patent 5,854,404 (the source of MaitakeGold 404®). 24

What type of tumors are inhibited by maitake glucan-protein extracts?

Preliminary studies in animal models have shown maitake glucan-protein extracts inhibit the growth of tumors in the colon, lungs, stomach, liver, prostate, cervix, bladder, and brain, as well as leukemia.* The significance of this inhibition in animal models to the human condition is not clear at this time, but it does give us an idea of the potential of maitake glucan-protein complexes.

What is the proper dosage for MaitakeGold 404®?