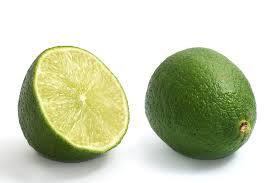 Limes are a popular citrus fruit that can be either sour or sweet, depending on the variety. Originating in South-east Asia, limes were carried by Arab traders into Egypt and North Africa in the tenth century. From there, the Moors later took them to Spain during the thirteenth century. With the onslaught of the Crusades, the lime’s journey expanded, and was carried to southern Europe and later to the Americas by Christopher Columbus. British explorers to the West Indies discovered the lime’s ability to ward off scurvy. In the sixteenth century, West Indies limes were introduced to the Florida Keys by the Spanish, and are now referred to as the Key lime. As limes are especially susceptible to frost, they are primarily grown in Florida, Mexico and Brazil.

Use limes in place of almost any dish that calls for lemons. For a simple application, squeeze limejuice onto quartered avocados for a snack. Or, combine fresh-squeezed limejuice with sugarcane juice and either plain or sparkling water for refreshing limeade. For more lime recipes, pick up a copy of my “Encyclopedia of Healing Foods”.