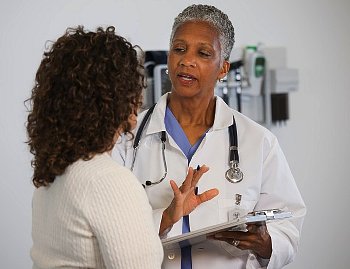 What are uterine fibroids?

Uterine fibroids are bundles of smooth muscle and connective tissue that can be as small as a pea or as large as a grapefruit. Although they are sometimes called “tumors,” fibroids are not cancerous. However, because they disrupt the blood vessels and glands in the uterus, they can cause bleeding and loss of other fluids. Perhaps thirty percent of women over age thirty have at least one fibroid. Hysterectomies due to fibroids are the most common indication for major surgery in women.

The overwhelming majority of uterine fibroids are without symptoms, but they can produce vague feelings of discomfort, pressure, congestion, bloating, heaviness; and can also produce pain during intercourse, increased urinary frequency, backache, abdominal enlargement, and abnormal bleeding.

Uterine fibroids can undergo degenerative changes with necrosis, resulting in cystic degeneration and calcification can occur.

What causes of uterine fibroids?

Increases in local estrogen (specifically estradiol) concentration within the fibroid itself are thought to play a role in the cause and growth. Concentrations of estrogen receptors in fibroid tissue are higher than in the surrounding tissue. In addition to an excess of estrogen production within the body, a strong case can be made that the role of the most significant environmental factor assaulting female hormonal health – compounds known as xenoestrogens. These compounds are also known in the scientific community by the names: endocrine or hormone disrupters, and environmental estrogens, hormonally active agents, estrogenic substances, estrogenic xenobiotics, and bioactive chemicals. Examples of xenoestrogens: phthalates (plastics); pesticides; tobacco smoke byproducts; and various solvents. Xenoestrogens enhance or block the effects of estrogen in the body by binding to estrogen receptors. They also promote a shift from healthy estrogen breakdown products to cancer causing estrogen metabolites.

Are there specific foods to help improve uterine fibroids?

The most important dietary recommendations are to eat a high fiber diet rich in phytoestrogens while avoiding saturated fat, sugar, and caffeine. These simple changes can dramatically reduce circulating estrogen levels and reduce estrogen’s influence on the fibroid. One study looked at what happened when women switched from the standard American diet (40 percent of calories from fat, only 12 grams of fiber daily) to healthier diet (25 percent of calories from fat, 40 grams of fiber). Results showed a thirty-six percent reduction in blood estrogen levels within eight to ten weeks.

Phytoestrogens or plant estrogens are able to bind to the same cell receptors as the estrogen your body produces. That’s a good thing, because when phytoestrogens occupy the “parking places,” estrogen can’t produce effects on cells. By competing with estrogen, phytoestrogen causes a drop in estrogen effects, and are thus sometimes called antiestrogens. Great sources of phytoestrogens include soy and soy foods, ground flaxseeds, and nuts and seeds. In particular, I recommend eating 1-2 tablespoons of ground flaxseeds daily (personally, I like FortiFlax from Barlean’s).

What supplements do you recommend for uterine fibroids?

Reducing the size of uterine fibroids as well as the symptoms with natural medicines are easily accomplished goals in most cases. Unfortunately, this statement is supported more on clinical experiences of naturopathic physicians such as myself rather than on scientific evidence. Though the approach is scientifically rationale, i.e., if uterine fibroids are caused by an excess of estrogen produced in the body as well as the effects of xenoestrogens it makes sense that reducing estrogenic influences should shrink uterine fibroids. Here are the key supplement recommendations that I give using Natural Factors products:

EstroSense – a specialty formula designed to reduce toxic effects of estrogen and xenoestrogens. Take 2 capsules twice daily. Estrosense provides a number of compounds that have been shown to be beneficial in helping to detoxify and eliminate excess estrogens including:

Black cohosh extract. – the most widely used and thoroughly studied natural approach to menopause. The standard dose of black cohosh is based upon the delivery of 1-2 mg of the compound 27-deoxyacteine twice daily. In addition to clinical studies showing black cohosh extract is a safe, natural alternative in relieving menopausal symptoms, it has also been shown to be useful in relieving uterine fibroids.

Since most uterine fibroids are without symptoms, in most cases monitoring involves measuring the size of the fibroid by ultrasound.

When I was in private medical practice, I had several patients who improved dramatically by following the general dietary and nutritional supplement guidelines described above. For example, one patient, Ruth, a forty-one year old women, had a fibroid the size of a softball that led to dysfunctional uterine bleeding and many other symptoms that were so bad she was scheduled for a hysterectomy. Since she could not get in to have the surgery for three months, her friend suggested that she see me. After following my program for three months, all of her symptoms disappeared and the fibroid shrank to the size of an egg, making it possible for her to cancel her scheduled hysterectomy. Plus, since breast cancer and many other cancers are associated with an increased estrogenic effect, I know Ruth set herself up for a healthier, longer life.