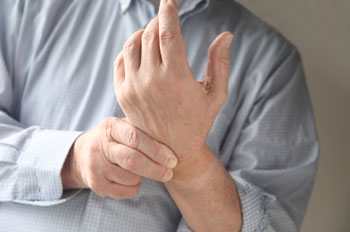 What is Rheumatoid Arthritis?

Rheumatoid arthritis (RA) is a chronic inflammatory condition that affects the entire body, but especially the joints. The joints typically involved are the hands, feet, wrists, ankles, and knees.

The onset of RA is usually gradual, but occasionally is quite abrupt. Fatigue, low-grade fever, weakness, joint stiffness, and vague joint pain may precede the appearance of painful, swollen joints by several weeks. Several joints are usually involved in the onset, typically in a symmetrical fashion, i.e., both hands, wrists, or ankles. In about one-third of persons with RA, initial involvement is confined to one or a few joints.1,2 Involved joints will characteristically be quite warm, tender, and swollen. The skin over the joint will take on a ruddy purplish hue. X-ray findings usually show soft tissue swelling, erosion of cartilage, and joint-space narrowing. As the disease progresses, deformities develop in the joints of the hands and feet. The common terms used to describe these deformities include: swan neck, boutonniere, and cock-up toes.

There is abundant evidence that RA is an autoimmune reaction, in which antibodies formed by the immune system attack components of joint tissues. Yet what triggers this autoimmune reaction remains largely unknown. Speculation and investigation have centered around genetic factors, abnormal bowel permeability, lifestyle and nutritional factors, food allergies, and microorganisms. RA is a classic example of a multifactorial disease, wherein an assortment of genetic, dietary, and other factors contribute to the disease process.

What dietary factors are important in Rheumatoid Arthritis?

Diet has been strongly implicated in RA for many years, in regard to both cause and cure. The major focus in dietary therapy is to eliminate food allergies, increase the intake of antioxidant nutrients, follow a vegetarian diet, and alter the intake of dietary fats and oils. A long-term study conducted in Norway at the Oslo Rheumatism Hospital showed that following these dietary principles can be “curative” in some individuals with RA, and significantly reduce symptoms in others.

The first step is a therapeutic fast or an elimination diet (see Food Allergy), followed by careful reintroduction of foods to detect allergens. In particular, I highly stress the importance of using RevitalX – a high potency multinutrient powdered drink mix from Natural Factors – during the allergy elimination phase and for maintenance after that. This product was developed by Michael Lyon, M.D., and specifically engineered to be an excellent source of important nutrients to support the gastrointestinal lining and aid detoxification. Take two servings daily.

Virtually any food can aggravate RA, but the most common offenders are wheat, corn, milk and other dairy products, beef, nightshade family foods (tomatoes, potatoes, eggplants, peppers, and tobacco) and coffee. After isolating and eliminating all allergens, a diet rich in whole foods, vegetables, and fiber, and low in sugar, meat, refined carbohydrates, and animal fats is recommended.

The importance of a diet rich in fresh fruits and vegetables in the dietary treatment of RA cannot be overstated. These foods are the best sources of dietary antioxidants, including vitamin C, beta-carotene, vitamin E, selenium. Several studies have shown that the risk of RA is highest among people with the lowest levels of dietary antioxidants. An excellent source of antioxidants include flavonoid-rich berries, such as cherries, cranberries, hawthorn berries, blueberries, blackberries, raspberries and strawberries. Carotenoids are beneficial antioxidants found in yellow and green vegetables, including squashes, yams, carrots and the cabbage family vegetables.

Vegetarian diets are often beneficial in the treatment of inflammatory conditions like RA, presumably as a result of decreasing the availability of arachidonic acid for conversion to inflammatory prostaglandins and leukotrienes. Another important way in which a more vegetarian diet may be helpful in RA is that is has a higher alkalinity than a meat-based diet. The severity of RA has been shown to be inversely related to the pH of the joint fluid – the lower the pH (high acid) the greater the pain and inflammation.

During flare-ups, fresh pineapple juice along with some fresh ginger root may help to relieve symptoms of RA due to their anti-inflammatory activity. Ginger possesses anti-inflammatory action by inhibiting the manufacture of inflammatory compounds and by the presence of an anti-inflammatory enzyme similar to bromelain, which is found in pineapple. In one clinical study, seven patients with RA in whom conventional drugs had provided only temporary or partial relief were treated with ginger. One patient took 50 g/day of lightly cooked ginger while the remaining six took either 5 g of fresh or 0.1-1 g of powdered ginger daily. All patients reported substantial improvement, including pain relief, joint mobility, and decrease in swelling and morning stiffness.

What nutritional supplements should I take for Rheumatoid Arthritis?

Fish oils rich in eicosapentaenoic acid (EPA) and docosohexanoic acid (DHA) have been shown to be extremely helpful in the relief of symptoms (morning stiffness and joint tenderness), fish oil supplementation has produced favorable changes in suppressing the production of inflammatory compounds secreted by white blood cells. improving psoriasis. The dosage used in the double-blind clinical studies has typically provided 3,000 mg EPA+DHA (e.g., 1.8 g EPA and 1.2 g DHA) per day.

RevitalX should be continued as a medicinal food. Take one serving daily for maintenance.

Proteolytic Enzymes (or proteases) include bromelain (pineapple enzyme), papain (papaya enzyme), and Serratia peptidase (the “silk worm” enzyme). Preparations of proteolytic enzymes have been shown to be useful in RA and other inflammatory conditions. For anti-inflammatory effects, proteolytic enzyme products should be taken on an empty stomach. Take two capsules of a high potency complex twice daily between meals. I recommend Repair Gold from Enzymedica

Curcumin, the yellow pigment of Curcuma longa (turmeric), exerts excellent support for the body’s anti-inflammatory and antioxidant systems. Curcumin is as effective as either cortisone or the potent anti-inflammatory drug phenylbutazone in models of acute inflammation. However, while phenylbutazone and cortisone are associated with significant toxicity, curcumin is without side effects. In human studies, curcumin has demonstrated some beneficial effects that are comparable to those of standard drugs. Theracurmin and Meriva are the most biovailable forms of curcumin. In RA, the recommended dosage for Theracurmin is 60 mg two to three times daily. For Meriva, 2000 mg daily.

Defective manufacture of androgens (male hormones such as testosterone and dehydroepiandrosterone [DHEA]) has been proposed as a potential predisposing factor for rheumatoid arthritis (as well as systemic lupus erythematosus). This association suggests a possible therapeutic response to DHEA supplementation. In my clinical experience, many patients with RA and other autoimmune diseases have reported significant improvement. Although there are no clinical studies in RA with DHEA supplementation, there have been studies conducted at Stanford Medical Center in women with systemic lupus erythematosus (lupus or SLE). These studies showed DHEA supplementation to produce some benefits. Given DHEA’s positive effects in treating SLE, even in the absence of double-blind clinical studies in rheumatoid arthritis, DHEA supplementation appears warranted. I suggest talking to your doctor about DHEA therapy as the dosage required will probably be above 50 mg per day. In women the major side effect at this dosage and above is mild-to-severe acne. Men do not usually have any side effects with DHEA.

Improvements in symptoms is the best monitor.

“About a month ago, I was diagnosed with rheumatoid arthritis in both knees and could barely walk . . . I knew that taking prescription drugs could cause more harm than good if taken over a long period of time. I inquired at my favorite health food store about a natural remedy. One of the owners recommended your wonderful product, Zymactive. Zymactive relieved the pain and stiffness just as well as the prescription drug. Thank you, Dr. Murray. CS