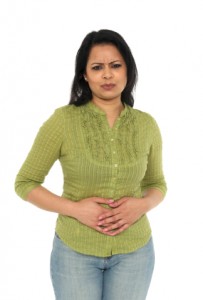 What is Premenstrual Syndrome?

Although there is a wide spectrum of symptoms, there are common hormonal patterns among PMS patients compared to women who have no symptoms of PMS. The primary finding is that estrogen levels are elevated and plasma progesterone levels are reduced five to ten days before the menses, or the ratio of estrogen to progesterone is increased. In addition to this hormonal abnormality, hypothyroidism and/or elevated prolactin levels are common.

What dietary factors are important in Premenstrual Syndrome?

Reduce or eliminate the amount of animal products in the diet, and increase consumption of fiber-rich plant foods, including fruits, vegetables, grains, and legumes). Vegetarian women have been shown to excrete 2-to-3 times more estrogen in their feces and have 50 percent lower levels of free estrogen in their blood than omnivores. These differences are thought to be a result of the lower fat and higher fiber intake of vegetarians.

Considerable evidence suggests that caffeine consumption is strongly related to the presence and severity of PMS. Therefore, caffeine must also be avoided by women with PMS. The effect of caffeine is particularly significant in the psychological symptoms associated with PMS, such as anxiety, irritability, insomnia, and depression. If breast tenderness and fibrocystic breast disease are the major symptoms as caffeine has an adverse effect on the way estrogen stimulates breast tissue.

There is also evidence phytoestrogens may exert a balancing effect when estrogen levels are high as is commonly seen in the premenstrual syndrome (PMS). The consumption of soy foods is the most economical, and possibly the most beneficial, way to increase the intake of phytoestrogens. Vitamin B6 also has an affect on the metabolism of estrogen. Vitamin B 6 is high in yams, leafy green vegetables and legumes.

Excessive salt (sodium chloride) consumption, coupled with diminished dietary potassium, greatly stresses the kidneys’ ability to maintain proper fluid volume. As a result some people are “salt-sensitive,” in that high salt intake causes high blood pressure or, in other cases, water retention. In general, it is a good idea to avoid salt if you have PMS. If you tend to notice more water retention during the latter part of your menstrual cycle, reducing your salt intake is an absolute must.

What nutritional supplements should I take for Premenstrual Syndrome?

The nutrients discussed below are provided at recommended levels when taking 3 tablets of MultiStart for Women twice daily.

Vitamin B6 is critical to maintaining hormonal balance. Vitamin B6 supplementation has been shown to exert positive effects on all PMS symptoms (particularly depression) in many women. The improvement is achieved via a combined reduction in mid-luteal estrogen levels and increase in mid-luteal progesterone levels. Since 1975, there have been at least a dozen double-blind clinical trials. In most situations, the therapeutic dosage of 50 to 100 mg per day is generally regarded as safe, even for long-term use.

Magnesium deficiency is strongly implicated as a causative factor in premenstrual syndrome. Red blood cell magnesium levels in PMS patients have been shown to be significantly lower than in normal subjects. As magnesium plays such an integral part in normal cell function, magnesium deficiency may account for the wide range of symptoms attributed to PMS. While magnesium supplementation has been shown to be effective on its own, even better results may be achieved by combining it with vitamin B6 and other nutrients. Several studies have shown when PMS patients are given a multivitamin-and-mineral supplement containing high doses of magnesium and pyridoxine, they experience a tremendous reduction in PMS symptoms. The recommended range of magnesium is 300 to 450 mg daily.

Calcium supplementation has produced significant improvements in PMS symptoms in double-blind studies. It is theorized, based primarily on animal research, that calcium improves the altered hormonal patterns, neurotransmitter levels, and smooth muscle responsiveness noted in PMS. Further support for the importance of calcium supplementation in treating PMS was the finding that women with PMS have reduced bone mineral density. The recommended dosage for calcium in PMS is 1,000 to 1,500 mg daily.

Zinc levels have been shown to be lower in women who have PMS. Zinc is required for proper action of many body hormones, including sex hormones, as well as in the control of the secretion of hormones. The suggested range for zinc supplementation is 15 to 20 mg.

Chasteberry (Vitex agnus-castus) extract appears quite helpful in relieving PMS. In two surveys of gynecological practices in Germany, physicians graded chasteberry extract as good or very good in the treatment of PMS. More than 1,500 women participated in studies of chasteberry. One-third of the women experienced complete resolution of their symptoms, while another 57% reported significant improvement and 90% reported improvement or resolution. Chasteberry extract appears to be particularly useful in cases of corpus luteum insufficiency or prolactin excess. The usual amount of chasteberry extract to take (often standardized to contain 0.5 percent agnuside) in tablet or capsule form is 175 to 225 mg per day. If you are using the liquid extract, the typical amount is 2 ml per day.

You may be asking, “If one of the primary features of PMS for most women is an elevated estrogen-to-progesterone ratio, why not simply take progesterone?” Although progesterone administration is a popular recommendation by many physicians (M.D.s and N.D.s alike), I have some reservations. First of all, although progesterone administration has been the most common prescription for PMS by the medical community, controlled clinical trials have failed to consistently demonstrate the superiority of progesterone therapy over a placebo (there is a significant placebo response in PMS, by the way). The studies that demonstrate a beneficial effect of progesterone therapy have used dosages that far exceed the normal levels for progesterone and for the estrogen-to-progesterone ratio (200 to 400 mg twice daily as a vaginal or rectal suppository, from fourteen days before the expected onset of menstruation until the onset of vaginal bleeding). Side effects, although generally mild, are common. Irregularity of menstruation, vaginal itching, and headache are reported more frequently by the women who took the progesterone. Secondly, philosophically I would rather help the body naturally improve the estrogen-to-progesterone ratio by addressing the underlying causative factors, such as reduced detoxification or clearance of estrogen, along with reduced corpus luteum function, rather than artificially and drastically tipping the ratio in favor of progesterone. Lastly, I do not recommend unsupervised use of progesterone creams as the first step in treating PMS, but rather as a possible last choice after other natural measures have failed. If you elect to give a progesterone-containing cream a try, please work with your physician.

The reduction of PMS symptoms is the best monitor on the effectiveness of the program.