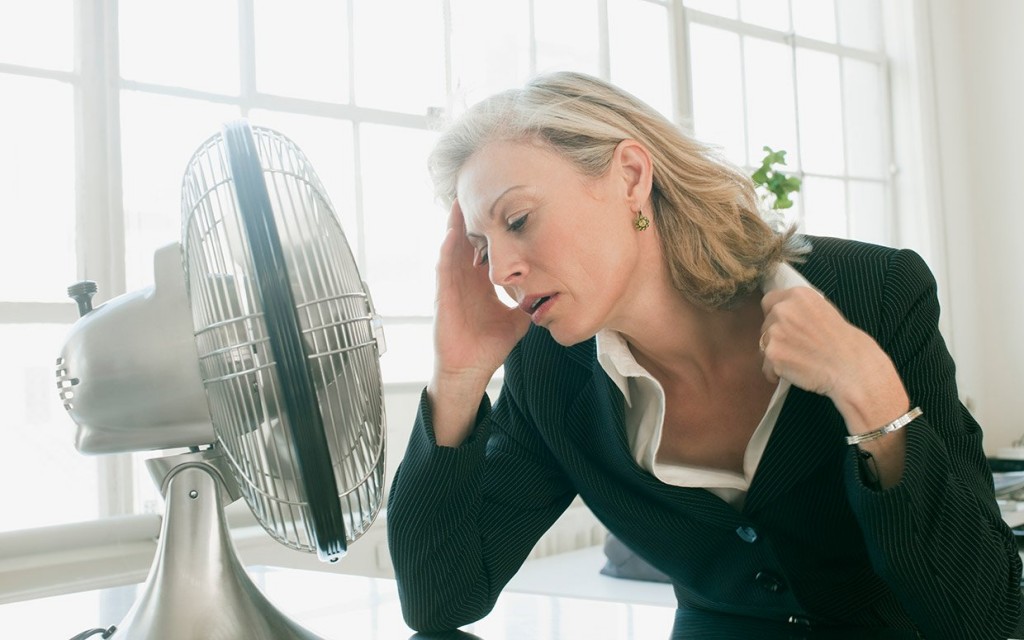 Menopause denotes the cessation of menstruation in women, which usually occurs when a woman reaches the age of fifty but may occur as early as 40 and as late as 55 years of age. Six to twelve months without a menstrual period is the commonly accepted rule for diagnosing menopause. The time period prior to menopause is referred to as perimenopausal, while the time period after menopause is referred to as postmenopausal. During the perimenopausal period, many women have irregular periods.

What are the signs and symptoms of Menopause?

The most common complaints of menopause are hot flashes, headaches, atrophic vaginitis, frequent urinary tract infections, cold hands and feet, forgetfulness, and an inability to concentrate. In the United States, sixty-five to eighty percent of menopausal women experience hot flashes to some degree.

Menopause occurs when there are no longer any eggs left in the ovaries. This “burning out” of the ovaries reflects the natural course of events. At birth, there are about one million eggs (ova). This number drops to around 300,000 or 400,000 at puberty, but only about four hundred of these ova will actually mature during reproductive years. By the time a woman reaches the age of fifty, few eggs remain. With menopause, the absence of active follicles (the cellular housing of the egg) results in reduced production of estrogen and progesterone. In response to this drop in estrogen, the pituitary gland increases secretion of follicle-stimulating hormone (FSH) and luteinizing hormone (LH).

What dietary factors are important in Menopause?

The key dietary recommendation to relieve menopausal symptoms is to increase the amount of plant foods, especially those high in phytoestrogens, while reducing the amount of animal foods in the diet. Phytoestrogens are plant compounds that are capable of binding to estrogen receptors and can replace some of the effect of estrogen that is no longer being made. Foods high in phytoestrogens include soy beans and soy foods, flaxseeds, nuts, whole grains, apples, fennel, celery, parsley, and alfalfa. A high intake of phytoestrogens is thought to explain why hot flashes and other menopausal symptoms rarely occur in cultures in which people consume a predominantly plant-based diet. Increasing the intake of dietary phytoestrogens helps decrease hot flashes, increase maturation of vaginal cells, and inhibit osteoporosis. In addition, a diet rich in phytoestrogens results in a decreased frequency of breast, colon, and prostate cancers. Furthermore, it is important is to increase the consumption of soy foods. Clinical studies have shown eating soy foods (the equivalent of 2/3 cups of soybeans daily) to be effective in relieving hot flashes and vaginal atrophy.

Cabbage family foods, including broccoli, Brussels’ sprouts, cabbages, collards, kale, and mustard and turnip greens, are good food choice for women going through menopause. Not only for their ability to protect against breast cancer and heart disease, but also because of their high content of nutrients that are supportive of bone health such as calcium, magnesium, and folic acid.

What nutritional supplements should I take for Menopause?

Black Cohosh (Cimicifuga racemosa) extract is the most well researched natural approach to menopausal symptoms. Most, but not all, studies show very positive results. For example, in one study, when 80 patients were given either black cohosh extract (two tablets twice daily, providing 4 mg 27-deoxyacteine daily) conjugated estrogens (0.625 mg daily), or placebo for 12 weeks, the black cohosh extract produced the best results. The number of hot flashes experienced each day dropped from an average of 5 to less than 1 in the black cohosh group. In comparison, the estrogen group dropped from only 5 to 3.5. Even more impressive was the effect of black cohosh on building up the vaginal lining.

While an estrogenic effect had been noted in some early animal studies, more recent studies with black cohosh extracts demonstrated no estrogenic activity. In studies with various types of breast cancer cells, black cohosh has shown no stimulatory effects. Therefore, black cohosh does not increase the risk of breast cancer as conjugated estrogens do. The dosage of black cohosh extract used in the majority of clinical studies has been enough to provide 2 mg of 27-deoxyacteine twice daily. I prefer to recommend MenoSense because of its additional components that support black cohosh at a dosage of one or two capsules twice daily.

Promensil® – a red clover (Trifolium pratense) extract – has also shown beneficial effects in preliminary studies in women with menopausal symptoms and can be used as an alternative to black cohosh. Red clover is very rich in phytoestrogens similar in action to soy isoflavones. The dosage of Promensil is 40 to 80 mg daily.

EstroSense from Natural Factors is a specialty formula designed to reduce toxic effects of estrogen and xenoestrogens seems to help some women who are unresponsive to black cohosh alone. Take 2 capsules twice daily.

A reduction in menopausal symptoms is a sign that the program is providing benefit.