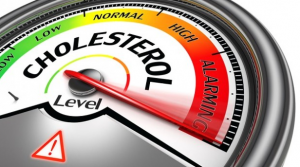 Cholesterol is a fatty substance in the body that serves several vital roles. It is a building block for various hormones and bile acids; and it plays a major role in stabilizing cell membranes. While proper cholesterol levels are important to good health, the evidence overwhelmingly demonstrates that elevated blood cholesterol levels greatly increase the risk of death due to heart disease. (See also Atherosclerosis.)

Currently, experts recommend that your total blood cholesterol level should be less than 200 mg/dl from a fasting blood sample. The HDL level should be greater than 40 mg/dl. The LDL level limit is based on your current health history and risk factors:

*For very-high-risk patients (those having signs and symptoms of CVD, a prior cardiovascular event, or with multiple risk factors such as diabetes, continued smoking, and high blood pressure), an LDL of less than 70 mg/dl is often recommended.

Elevated cholesterol levels are usually reflective of dietary and lifestyle factors, although it can also be due to genetic factors.

What dietary factors are important in lowering high cholesterol?

Eat less saturated fat and cholesterol by reducing or eliminating the amounts of animal products in the diet. Increase the consumption of fiber-rich plant foods (fruits, vegetables, grains, legumes, and raw nuts and seeds). See also ATHEROSCLEROSIS. When attempting to lower cholesterol through diet it is important to eat a variety of cholesterol-lowering vegetables including celery, beets, eggplant, garlic and onion, peppers and root vegetables. In addition, dandelion root and Jerusalem artichoke contains the fiber inulin which improves production of antioxidant enzymes while decreasing total cholesterol and triglyceride levels, and raising concentrations of beneficial HDL cholesterol.

Diets rich in legumes, including peanuts, are being used to lower cholesterol levels and soy protein has been shown in some studies to be able to lower total cholesterol levels by 30% and to lower LDL, or “bad” cholesterol, levels by as much as 35-40%. Nuts and seeds, particularly almonds and walnuts, are also quite useful in fighting against heart disease by lowering cholesterol through their fiber, monounsaturated oil, and essential fatty acid content. Hazelnuts have an exceptional concentration of copper, a key component in the intracellular form of an important antioxidant enzyme called superoxide dismutase, which disarms free radicals that would otherwise damage cholesterol and other lipids. Ground flax seed lowers two cholesterol-carrying molecules, apolipoprotein A-1 and apolipoprotein B.

What nutritional supplements should I take for high cholesterol?

Foundation Supplements. There are four key products that I think are critical in supporting good health:

*Typically, lipid-lowering agents will show a greater percentage reduction when cholesterol or triglyceride levels are high. These effects noted in this table are not entirely accurate as results are displayed in a range of elevated levels in the studies included in this illustration.

Here are my guidelines on what product to use:

Niacin (vitamin B3) is the most well-researched natural cholesterol lowering agent. In fact, several studies have shown niacin to produce better overall results than cholesterol-lowering drugs. Niacin typically lowers total cholesterol by 18%, LDL by 23% and triglycerides by 20% while raising HDL levels by 31%. Niacin is available as a prescription agent, yet despite its advantages, niacin accounts for only 7.9 percent of all prescriptions to lower cholesterol. One reason is it produces a bothersome side effect. Flushing of the skin typically occurs twenty to thirty minutes after niacin is taken. Newer timed-released preparations on the market, referred to as “intermediate-release” niacin, have solved some of the side effects of niacin and large clinical trials have shown them to be extremely well tolerated.

For best results niacin should be given at night, as most cholesterol synthesis occurs while sleeping. If non-timed released niacin is being used, it should begin with a dose of 100 mg a day and be carefully increased over 4 to 6 weeks to the full therapeutic dose of 1.5 to 3 g daily. If a timed-released preparation (intermediate release only!) is being used, a 500-mg dosage should be given at night and increased to 1500 mg after 2 weeks. If after 1 month of therapy the dosage of 1500 mg per day fails to effectively lower LDL cholesterol, the dosage should be increased to 2000 mg and if that dosage fails to lower lipids, move on to another option.

Berberine is an alkaloid found in many plants, but most notably in goldenseal (Hydrastis canadensis) and barberry (Berberis vulgaris). Berberine has been extensively studied in clinical trials for lowering blood sugar, lipids, and hypertension. Results showed quite convincingly that berberine (500 mg two to three times daily) produces the clinical results on par with conventional drugs, but with no significant side effects. In regard to its effects on blood lipids not only does it lower total and LDL cholesterol, unlike statins, berberine also lowers blood triglycerides and raises beneficial HDL cholesterol (see Table 2 above). Berberine produces these metabolic effects on through various physiological mechanisms. Most of its actions involve AMP-activated protein kinase (AMPK) – an enzyme involved in regulating the body’s energy levels. By targeting this pathway, berberine induces the uptake of glucose into cells, where it is converted into energy. Activating AMPK is also key to berberine’s function in regulating blood lipids, such as LDL cholesterol, total cholesterol and triglycerides. This enzyme acts as a master switch, regulating energy production and storage as well as lipid metabolism. It helps burn fatty acids within cells, stabilize the receptors for LDL cholesterol and inhibit the formation of lipids by the liver.

Garlic can lower total cholesterol by about 10-12%, lower LDL by 12-15%, and raise HDL levels by 10-12%. Based on a great deal of clinical research, the recommended daily dose of a commercial garlic product should provide a total allicin potential of at least 4,000 mcg. GarlicRich from Natural Factors provides nearly twice this level per tablet. The alternative is at least at a daily dosage of at least 4,000 mg of fresh garlic-roughly one or two cloves.

Bergamot is a bitter, yellowish-orange citrus fruit native to southern Italy. It is cultivated mainly for an essential oil from the colored peel that is used to scent foods, cosmetic products, and perfumes. It is also what gives Earl Grey tea its distinctive taste. Bergamot has also historically been used to improve cardiovascular function. Multiple clinical trials have now shown evidence that bergamot can reduce total cholesterol and LDL cholesterol. Like berberine, flavonoids and other polyphenols from the bergamot enhance AMPk activity. They also exert antioxidant and anti-inflammatory effects. The typical dosage of bergamot polyphenol fraction extract is 1,000-1,500 mg per day.

Pantethine is the stable form of pantetheine, the active form of vitamin B5 or pantothenic acid. Pantothenic acid is the most important component of coenzyme A (CoA). This enzyme is involved in the transport of fats to and from cells, as well as to the energy-producing compartments within the cell. Pantethine has significant lipid-lowering activity while pantothenic acid has little (if any) effect in lowering cholesterol and triglyceride levels. Pantethine administration (standard dose 900 mg/day) has been shown to significantly reduce serum triglyceride (32%), total cholesterol (19%), and LDL cholesterol (21%) levels while increasing HDL cholesterol (23%) levels. It appears to be especially useful in diabetics. The lipid-lowering effects of pantethine are most impressive when its toxicity (virtually none) is compared with conventional lipid-lowering drugs.