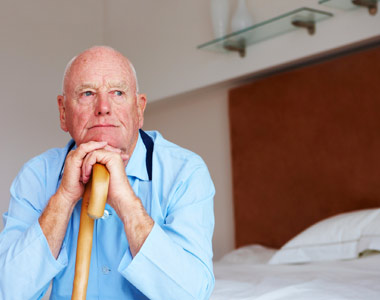 What is Cerebral Vascular Insufficiency?

Cerebral vascular insufficiency refers to decreased blood supply to the brain. It is extremely common among the elderly in developed countries due to the high prevalence of atherosclerosis (hardening of the arteries). The artery affected in most cases is the carotid artery. A pair of carotid arteries—one on each side of the neck running parallel to the jugular vein—are the main arteries that supply blood to the brain.

Typically,  cerebral vascular insufficiency develops at the carotid bifurcation—the splitting of the carotid artery into the internal (supplying the brain) and external (supplying the face and scalp) branches. This bifurcation is similar to a stream splitting into two branches. At the bifurcation, just like at a split in a stream, debris and sediment accumulates. Significant symptoms begin to appear in most cases only when the blockage of the artery has reached 90 percent. This situation is similar to what occurs in angina.

Symptoms of cerebral vascular insufficiency are caused by reduced blood flow and oxygen supply to the brain. Severe disruption of blood and oxygen supply results in a stroke. The official definition of a stroke is “loss of nerve function for at least 24 hours due to lack of oxygen.” Some strokes are quite mild; others can leave a person paralyzed, in a coma or unable to talk, depending on which part of the brain is affected. Smaller “mini-strokes,” or transient ischemic attacks (TIAs), may result in loss of nerve function for an hour or more, but less than 24 hours. TIAs may produce transient symptoms of cerebral vascular insufficiency: dizziness, ringing in the ears, blurred vision, confusion and so on.

In most cases, cerebral vascular insufficiency is a consequence of atherosclerosis.

What Dietary Factors are Important in Cerebral Vascular Insufficiency?

The dietary factors for atherosclerosis also apply to cerebral vascular insufficiency. I recommend a diet that includes the following:

Which Nutritional Supplements Should I Take for Cerebral Vascular Insufficiency?

Fish oil are protective against a stroke. Low levels of EPA and DHA are found in the arterial plaque in the carotid arteries of patients with significant carotid blockage. Supplementation with EPA+DHA is associated with reducing inflammation within the atherosclerotic plaque thereby reducing the likelihood of the plaque rupturing leading to blood clots that may cause a stroke.

Ginkgo biloba extract (GBE) has been the subject of more than 40 double-blind studies on the treatment of cerebral vascular insufficiency. In these well-designed studies, GBE has produced a statistically significant regression of the major symptoms of cerebral vascular insufficiency and impaired mental performance. The recommended dosage is 240 to 320 mg per day (can be taken all at once) GBE standardized to contain 24 percent ginkgo flavonglycosides. There has been concern over the use of GBE in patients also taking the anticoagulant drug Coumadin. Although quite rare, there may be a possible interaction that could lead to excessive bleeding or hemorrhage. Use GBE with caution if you’re taking Coumadin.

SerraGold from Enzymedica contains serratia peptidase, the proteolytic enzyme referred to as the “miracle enzyme” by Dr. Hans Neipper for its ability to help improve cerebral blood flow by reducing atherosclerotic plaque in the carotid arteries. Take two capsules  two times daily on an empty stomach.

Anyone who experiences signs and symptoms of cerebral vascular insufficiency should consult a physician immediately for proper evaluation. The modern evaluation of blood flow to the brain involves the use of ultrasound techniques. These techniques use sound waves to determine the rate of blood flow and the degree of blockage.

If you have symptoms of severe cerebral vascular insufficiency, including frequent TIAs or a past stroke, along with severe (greater than 70 percent) blockage of the carotid artery, then carotid endarterectomy may be appropriate. However, before you elect to proceed with this surgery, I highly recommend that you consult a qualified EDTA chelation specialist. (For a discussion of EDTA, see angina.) For information on locating an EDTA chelation specialist, contact The American College of Advancement in Medicine (ACAM); 23121 Verdugo Drive, Suite 204, Laguna Hills, CA 92653; 800-532-3688; www.acam.org.

Improvements in the symptoms of cerebral vascular insufficiency should be apparent within two to three months. Blood flow measurements via ultrasound should also show improvements.