Sweet potato pie, casserole and other dishes, are frequently served at Thanksgiving dinner. 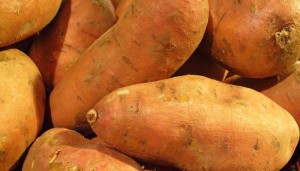 e of many, the sweet potato is not a member of the potato family. It is actually considered a Convolvulaceae, or morning glory family. Sweet potatoes are a native to Central America and have been consumed since prehistoric times, making them one of the oldest known vegetables. Christopher Columbus is the first noted to have brought the sweet potato back to Europe. Later Spanish and Portuguese explorers further spread the sweet potato by carrying it back to Africa, India, Indonesia and southern Asia. Southeastern settlers in the United States began cultivating sweet potatoes, making them a staple in southern cuisine.