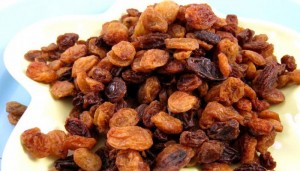 Raisins are a common American snack made from dehydrated grapes. Ancient Phoenicians and Armenians worked to prefect the process of making raisins. In Rome, raisins were used to adorn places of worship, used as barter currency and were even given as prizes at sporting events. Although grapes have thrived in the New World, it wasn’t until 1851 that raisins became a popular good in the San Joaquin Valley of California. Today, the San Joaquin Valley is the epicenter of the world raisin industry.

Almost all kids have had a box of raisins packed in their lunch at one point, and even more of us have enjoyed raisins mixed in trail mix. Try adding raisins to homemade granola to sprinkle over cereal, or add them to almost any baked good. For a more savory application of raisins mix them with almonds, pepper, onions and brown rice for a healthy side dish. When is the last time you enjoyed some raisins?