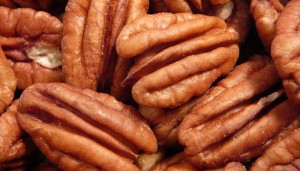 North American native to the Mississippi River valley, the pecan grows on a type of hickory tree that grows to a height of about 150 feet. Each tree produces about 200 pounds of the nut each year, and is harvested in the autumn. Archaeological evidence has revealed that pecans played a major role in the diets of prehistoric American Indians. The first record of this nut was made in the dietary of a Spanish explorer who was shipwrecked on Galveston Island in the 1540’s. A French explorer is credited for first using the word pecan in 1504, and it is also the French that are thought to have made the first pecan pie. Pecan trees were present in George Washington’s personal gardens, as in many community gardens. By 1802, pecans were being exported by the French and Spanish, creating a major industry for American colonists.

Although pecan pie is a personal favorite, try adding pecans to other baked goods such as banana bread, muffins, corn bread and pancakes. A great way to incorporate pecans into your regular diet is to add chopped pecans, smoked tofu, grated asiago or parmesan cheese to spinach for an tasty salad. Another yummy recipe idea is to spread goat cheese on sourdough bread and sprinkle minced rosemary or thyme on top with minced pecans. Broil in the oven until bubbly and serve with a green salad. Doesn’t that sound delicious?

According to a great deal of scientific research, the leading cause of impaired vision and blindness in the United States is an entirely preventable condition. Cataracts are white, opaque blemishes on the normally transparent lens of the eye. They occur as a result of damage to the protein structure of the lens, similar to the damage that occurs to the protein of eggs when they are boiled or fried. As a result, cataracts can make it difficult to see. Approximately six million people have some degree of vision-impairing cataract and among U.S. Medicare recipients, cataract surgery is the most common major surgical procedure with nearly one million procedures each year.