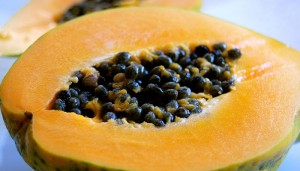 As a native to Central America, the papaya is a tropical fruit with a soft consistency and sweet taste. The papaya became a favorite of Spanish and Portuguese explorers, who spread the fruit to subtropical lands including India, the Philippines and regions of Africa. In the twentieth century, papaya was brought to the United States and has been cultivated in Hawaii since the 1920s.

To enhance the flavor of the papaya, sprinkle it with fresh limejuice and enjoy it as is. Add papaya to fruit salad, or even carve a divot in a papaya and fill it with fruit salad. A delicious dish is to combine diced papaya, sliced cooked chicken breast, onions and cashews with soy mayonnaise for a tropical chicken salad. Papaya is also a great addition to any salsa, adding a depth of flavor to the spicy condiment.