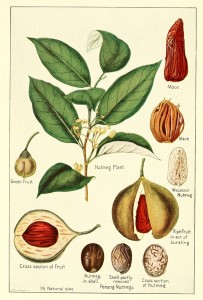 Nutmeg is the seed of a fruit similar to an apricot, grown on a tropical evergreen called the Moluccas. Native to the central Spice Islands of Indonesia, the nutmeg seed is dried in the sun for eight weeks, when its shell is then cracked open, revealing the nutmegs. Nutmeg has a long and rich history. It was one of the spices carried by Muslim traders between Arabia, India, and the Far East as far back as biblical times. Introduced to the European markets in the eleventh century by Arab traders in Constantinople, nutmeg became a luxury for the wealthy. Nutmeg was often used to flavor meat and wine and was once thought to be the only cure for the plague in Elizabethan London. Throughout the seventeenth century, nutmeg was a monopoly held by the Dutch who had control of the Spice Islands. It wasn’t until 1843, when French smuggled nutmeg trees were planted in Grenada, that the nutmeg monopoly was broken. Many describe the flavor of nutmeg to be the combination of pepper and cinnamon.

A great use of nutmeg is to combine 6 nutmegs, 3 ounces of cinnamon sticks, 1/3 cup chopped dried orange and lemon peel, ¼ cup whole cloves, ¼ cup allspice and 2 tablespoons finely chopped, crystallized ginger in a blender. After, wrap the mixture in 14 pieces of cheesecloth and tie with a string. Use the satchel to mull wine, with one bag per 750-milliliter bottle over medium-low heat. Add ½ cup water, and 1/3-cup sugar and continue to cook for 20 minutes for a delicious beverage to serve at your next though the colder months. For more information on other spices and food, check out a copy of my “Encyclopedia of Healing Foods”.