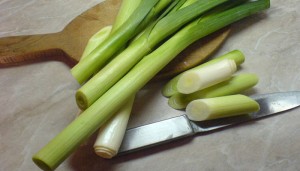 Leeks are a relative to the onion and garlic family, but are different as people consume their leaves rather than the bulb. They are a native to Central Asia, and have been cultivated in the region for thousands of years. Greeks and Romans popularized the vegetable, where it was thought to have a beneficial effect on the throat. It has even been said that the Roman emperor Nero ate leeks every day to help strengthen his voice. From Rome, leeks spread to the United Kingdom, where it thrived in the chilly environment. Leeks are even the national emblem of Wales and are still integral to the diet of many northern Europeans.

Leeks can be used in almost any way that an onion can. Add them to salads, omelets or soups, such as potato leek. One of my favorite leek dishes is a ham, leek and morel quiche. What is your favorite leek recipe? For more information on leeks and other vegetables, check out my “Encyclopedia of Healing Facts”.

According to a great deal of scientific research, the leading cause of impaired vision and blindness in the United States is an entirely preventable condition. Cataracts are white, opaque blemishes on the normally transparent lens of the eye. They occur as a result of damage to the protein structure of the lens, similar to the damage that occurs to the protein of eggs when they are boiled or fried. As a result, cataracts can make it difficult to see. Approximately six million people have some degree of vision-impairing cataract and among U.S. Medicare recipients, cataract surgery is the most common major surgical procedure with nearly one million procedures each year.