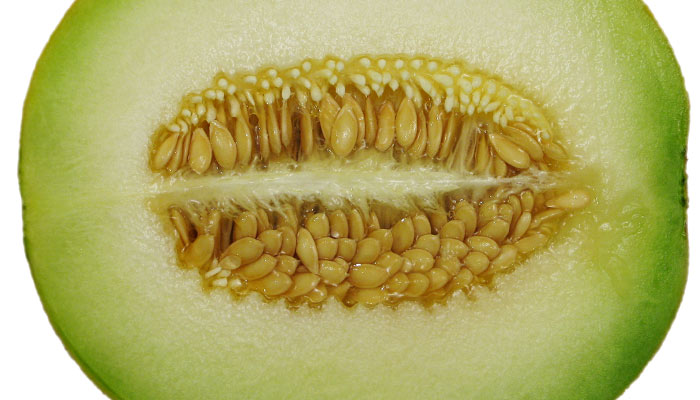 As a member of the curbitaceae family, honeydew melons are a relative of cucumbers and squash. It is thought that honeydews originated in Persia. Honeydew melon is present in Egyptian hieroglyphics dating as far back as 2,400 B.C.E., and was a prized as a food. Later cultivated by the Romans, honeydew were introduced to Europe during the rise of the Roman Empire. They did not gain popularity, however, until becoming a trend in the French royal court during the 15th century. Columbus carried honeydew melon seeds with him to America, as did Spanish explorers settling California. Today, most of America’s honeydew is still grown in California.

Honeydew’s sweet and mild flavor allows it to be combined with almost any other fruit. Mix it with pineapple, banana, kiwi, and berries for a yummy fruit salad. For a more savory application, toss diced honeydew with lemon, watercress, lime, cilantro and jicama for a Mexican inspired dish. For a refreshing breakfast, use half a honeydew as an edible bowl for yogurt or even cottage cheese. For more preparation tips, check out a copy of my “Encyclopedia of Healing Facts”.