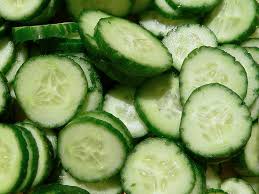 Although over 70% of them are made into pickles, cucumbers are nutritious and yummy in their own right. Cucumbers are a tropical plant that originated in Southeast Asia over 10,000 years ago. Early travelers to India introduced the cumber to other parts of Asia, and ancient civilizations in Egypt, Greece, and Rome. Cucumbers as beauty treatment is not a new idea, in fact in ancient times they were often used for their beneficial skin-healing properties. During the 17th century, cucumbers were introduced to the U.S., and also began to be cultivated in greenhouses. It is thought that the pickling of cucumbers began in Spain, and were of high value to Roman emperors.

Health Benefits:
Rich in silica, cucumbers contribute to the strength of our connective tissue, such as muscles, tendons, ligaments, cartilage, and bone.