Ginger as Effective as Synthetic Drug in Migraine, but Without the Side Effects 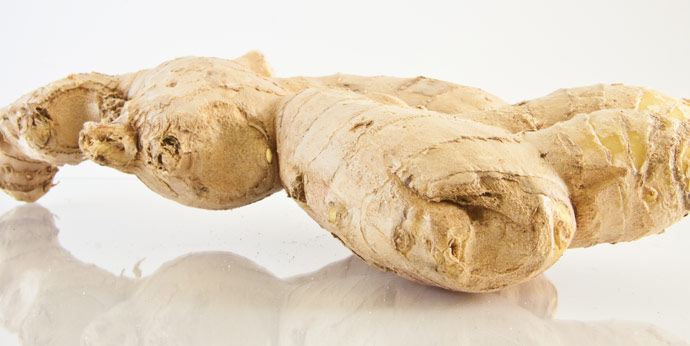 Migraine headaches are estimated to affect over 28 million Americans. These headaches are caused by excessive dilation of blood vessels in the head and are characterized by a throbbing or pounding sharp pain.

The standard medical approach is the use of over-the-counter (OTC) and prescription (Rx) drugs. The OTC options are pain relievers alone or in combination such as the combination of acetaminophen, aspirin and caffeine. OTC choices are usually of limited benefit, especially in more severe cases.

The most popular Rx drugs are the triptans. These drugs work by constricting blood vessels as well as blocking pain pathways in the brain. Sumatriptan (Imitrex) is regarded as the gold standard of these drugs as it has the longest track record and is the most studied. It brings about almost immediate relief for many patients, but headache recurs in almost 40% of people within 24 hours after taking the drug. Minor side effects of triptans include nausea, dizziness, drowsiness and muscle weakness. But, these medications can also cause more serious side effects such as coronary artery spasms, heart attacks, stroke, abnormal heart beats, and seizures.

There are a number of dietary and supplement strategies that have been shown to be effective alternative treatments in migraine with success rates often superior to standard therapy. In particular, a new study compared ginger powder head-to-head with Sumatriptan. Ginger showed equal effectiveness, but a better safety profile.

Ginger was also used historically in pain and inflammation. Some, but not all clinical studies have supported this use with positive results in various forms of arthritis, chronic low back pain, painful menstruation, and muscle pain. The active compounds of ginger are the volatile, aromatic compounds like gingerol.

Ginger has also been shown to exert a number of very interesting anti-inflammatory effects in experimental studies. Early studies in the treatment of migraine headaches were promising, but most were conducted with a combination product containing ginger extract and feverfew.

In a study conducted in Iran, a team of neurologists compared ginger and sumatriptan in 100 men and women who had suffered migraines for an average of seven years. The patients were randomly assigned to either the ginger group or the sumatriptan group. They were given a box of 5 caplets containing their test medication (250 mg caplet of dried ginger powder or an identically looking caplet containing 50 mg of sumatriptan in a double-blind fashion. Neither the participants nor the observers knew which caplets the patient was taking until the study was completed. Patients were instructed to take a caplet as soon as a migraine started.

For each headache that occurred during that month, participants recorded the time the headache began, headache severity before taking the medication and degree of pain relief at 30, 60, 90 and 120 minutes as well as 24 hours after taking it.

The dosage of ginger used in this study was very low (250 mg dried ginger root). Higher dosages more than likely would have produced even better results. Most clinical studies have used a dosage of 1g powdered ginger daily. My feeling is that fresh ginger at an equivalent dosage would yield even better results because it contains active enzymes and higher levels of other more active constituents as well. This equivalent dosage would be about 10g or one-third ounce fresh ginger, roughly a quarter-inch slice. The best method to take advantage of fresh ginger is to juice it. Ginger is a great addition to virtually every fresh fruit and vegetable juice. You can also juice or grate fresh ginger and add it to sparkling mineral water for some real ginger ale.

Fresh ginger can now be purchased in the produce section at most supermarkets. It is a phenomenal, easy available super natural medicine. When buying fresh ginger, the bronze root should be fresh looking, with no signs of decay like soft spots, mildew, or a dry, wrinkled skin. Store fresh ginger in the refrigerator.

Maghbooli M, Golipour F, Moghimi Esfandabadi A, Yousefi M. Comparison between the efficacy of ginger and sumatriptan in the ablative treatment of the common migraine. Phytother Res. 2014 Mar;28(3):412-5.