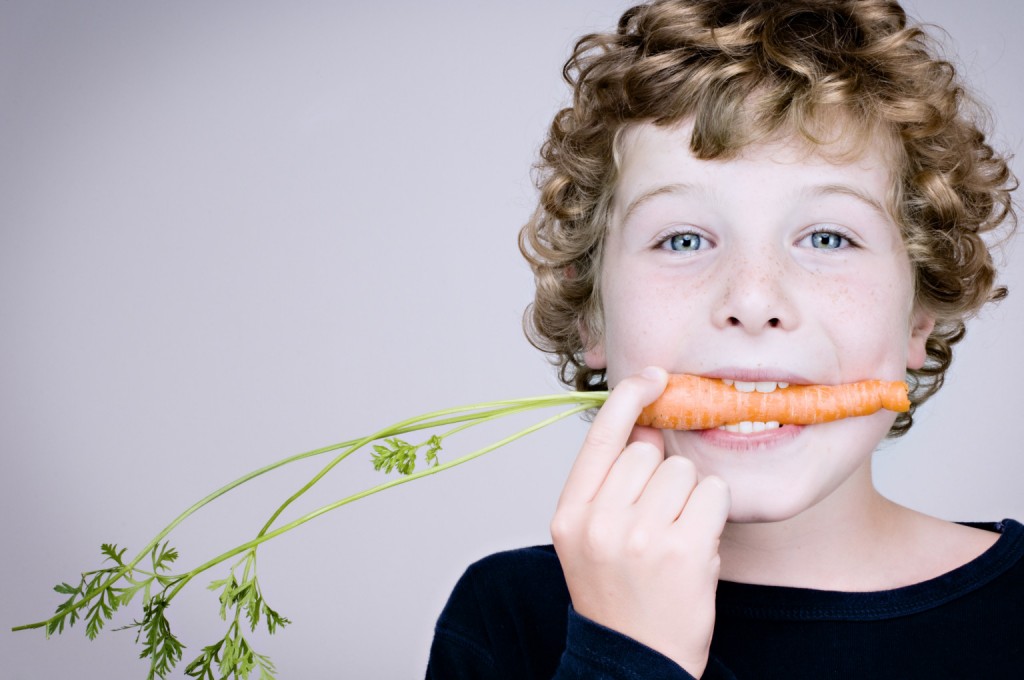 Brain cells are the most complex, long-living, and nutritionally demanding cells in the body. Studies
show that intelligence, memory, behavior, and concentration are all influenced by proper nutrition, and this is especially important to the developing brain.

The goal should be to help children bathe their brains in “super nutrition,” because high nutritional status equals higher mental function. And that means that what kids don’t eat can be as important as what they do. Foods to avoid include smoked or cured meats, fried foods, any source of trans-fatty acids, junk food, refined sugar, and high- fructose corn syrup.

In general, the same ideas associated with healthy eating in adults apply to kids—lots of fresh fruits and veggies. If kids turn their noses up at leafy greens, getting a juicer and mixing in apple and carrot juice can camouflage the taste.

But kids generally do like a number of brain-supporting veggies such as carrots, yams, and squash. For fruit, focus on berries. In animal studies, researchers have found that blueberries especially can help protect the brain and promote improved memory.

Giving kids a daily dose (25–50 mg, though there’s no problem with doses up to 100 mg) of grape seed or pine bark extracts is also a good idea. One study found that one month of daily supplementation with Pycnogenol (a proprietary pine bark extract) at a dose of 1 mg per kg of body weight improved attention and concentration in children with ADHD.

In addition to grape seed and pine bark extracts, there are some other key nutritional supplements to consider.

Recently, studies have indicated that enhancing gamma-Aminobutyric acid (GABA) activity may help improve mental function in children,
and a natural form known as PharmaGABA could be the best approach.

One of the most interesting studies on PharmaGABA was conducted by scientists from Japan’s Kyorin University Medical School. Researchers divided 60 6th graders into two groups that received either 100 mg of PharmaGABA or a placebo. The students then took a math test and were also evaluated for signs and feelings of stress. The results were quite dramatic. The average number of questions answered by the PharmaGABA group was 20 percent higher than the placebo group, and the number answered correctly also increased by 20 percent. Researchers also measured the amount of a stress related hormone in participants’ saliva as well as how much anxiety the children experienced, and found that the PharmaGABA group was more relaxed and focused compared to the placebo group.

PharmaGABA is safe and has recently achieved generally recognized as safe (GRAS) status in the United States. There are no known side effects or drug interactions at recommended levels.

Conventional physicians tend to overlook the most common nutrient deficiency in the United States—iron deficiency. This simple, essential nutrient can lead to low energy levels, poor immune function, and even symptoms of attention deficit disorder and hyperactivity. In fact, a recent study found that 84 percent of kids with ADD/ADHD were iron-deficient.

How provocative is that finding? Think about all of the prescriptions for Ritalin, Concerta, and Adderall that are being dispensed to kids who may simply need proper nutrition and adequate iron stores.

While ferrous sulfate is the most popular iron supplement, it often causes constipation or other gastrointestinal (GI) disturbance. Although it is best absorbed when taken on an empty stomach, doing so often causes nausea or GI upset. So, it is most often taken with food, and that greatly reduces its absorption.

One of the best forms of iron for kids, especially younger kids who cannot take pills and rely on chewable forms, is micronized ferrous pyrophosphate. It has no flavor, is free from gastrointestinal side effects, and provides a sustained release form of iron (up to 12 hours) with a high relative bioavailability—especially if taken on an empty stomach. For general health purposes, the following chart provides a good supplementation guideline.