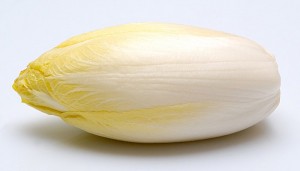 Endive is a chicory green that is today, much more popular in Europe than in the United States. Although its recognition is growing, it is still largely under valued. Endive is a member of the Compositae family, along with artichokes, dandelions, and lettuce. Chicory is a native of the Mediterranean region where it grew along roadsides, and has been consumed since ancient Greek and Roman times. In 1616, chicory began being cultivated in Germany, from where it soon spread throughout Europe. Chicory greens were brought to the United States by immigrants and planted in vegetable gardens across the country. In the 1800s, in Flanders, a technique for growing chicons in a dark space was discovered, creating what is today referred to as Belgian endive. A mild-flavored blanched vegetable, Belgian endive instantly became a hit in Paris’ haute cuisine circles. Cultivation of endive increased when it was discovered it could be used as a coffee extender. Today mixing chicory with coffee is still popular in French and Creole cuisine.

Try endive out in your daily diet. For a great hors d’oeuvre, serve endive petals with dip or filled with smoked salmon, goat cheese, spiced walnuts, baby shrimp, or even pâté. Adding endive to a salad, adds a refreshing and slightly bitter element. Toss Belgian endive with pears, Gorgonzola, and walnuts with a raspberry vinaigrette for a crowd-pleasing dish. Another quick side dish is to sauté endive and sprinkle it with parmesan cheese, lemon juice, honey and salt. Are you already an endive fan? If not, consider trying it this week!