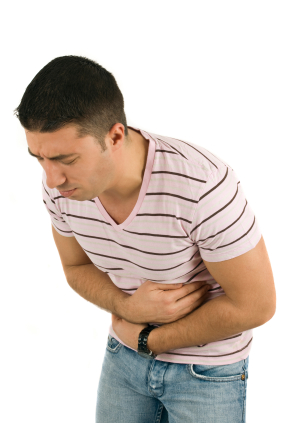 Gastroesophageal reflux disorder (GERD) is a common digestive disorder associated with heartburn and/or upper abdominal pain as well as a feeling of gaseousness, difficulty swallowing, feelings of pressure or heaviness after eating, sensations of bloating after eating, stomach or abdominal pains and cramps, or fullness in the abdomen.

The dominant medical treatment of GERD is the use of antacids and acid-blocker drugs such as Zantac, Tagamet, Pepcid AC, Nexium, Prilosec, Protonix, Prevacid, and Aciphex. Use of antacid therapy, especially the newer drugs, is associated with an increased risk for osteoporosis, heart arrhythmias, intestinal infections, bacterial pneumonia, and multiple nutrient deficiencies. And most seriously, these drugs may increase the development of various gastrointestinal cancers.

In addition, several review articles have concluded in regards to GERD, “that the efficacy of current drugs on the market is limited at best.” The “at best” signifies the fact that often these drugs cause more problems than they help.

The issues with these drugs are leading to a reexamination of the medical treatment of GERD by many researchers. A new study from researchers in Saudi Arabia showed a simple dietary change brought about 100% response rate in patients with mild GERD symptoms.

GERD is most often caused by the flow of gastric juices up the esophagus leading to a burning discomfort that radiates upwards and is made worse by lying down. The biggest cause of GERD symptoms is overeating. Other common causes include obesity, cigarette smoking, chocolate, fried foods, carbonated beverages (soft drinks), alcohol and coffee.

These factors either increase intra-abdominal pressure, thereby causing the gastric contents to flow upwards, or they decrease the tone of the esophageal sphincter. The first step in treating reflux esophagitis is prevention. In most cases this step simply involves eliminating or reducing the causative factor(s).

Due to side effects associated with the various drugs used in GERD including the use of drugs like baclofen that inhibit the relaxation of the esophageal sphincter which can lead to gastric reflux, researchers looked at dietary factors to see if there was any link to GERD. What they found was that between meal eating had the strongest association with GERD. A between meal snack is thought to increase gastric distention in upper stomach, as well as cause transient lower esophageal sphincter relaxation triggering reflux. In contrast, fasting clears stomach of food, reduces intra-abdominal pressure, and reflux.

Considering these factors, the researchers felt that two regular meals a day with only fluids in between would reduce reflux and lead to healing of esophagus caused by repeated refluxes. In testing this simple regimen in a small number of patients, it was shown to eliminate symptoms of GERD in 10 days. The researchers then conducted a a pilot study in 20 patients of endoscopically diagnosed GERD. Results indicated that it benefitted 100% of patients with mild GERD, 66% of patients with moderate GERD, and 33% of patients with severe GERD. These results indicate that this simple dietary recommendation can be extremely effective in mild to moderate cases and should also be used along with other natural approaches in more severe cases.

This study’s results are very exciting and indicate a strong option for people with GERD. Obviously, I am not a big fan of using acid-blocking drugs. While occasional use of calcium or magnesium-based antacids is totally acceptable (avoid any containing aluminum), I do not recommend long-term use of acid-blocking drugs in most circumstances. There is no question that blocking the production of stomach acid can reduce symptoms, but it also substantially blocks a normal process critically important to digestion and maintaining the proper intestinal environment important in fighting infection.

My suggestion is that in most people with GERD and other disorders of chronic indigestion is to focus on aiding digestion through natural measures. In regards to GERD, there a number of natural products with confirmed benefits. For example, several studies have shown alginate (a water-soluble fiber from a seaweed) works very well. (NOTE: Alginate is one of the components used to create the dietary fiber matrix known as PGX used to promote improved blood sugar control and weight management). In a very detailed review of all published clinical trials, it was shown that compared with the placebo response in GERD, which ranged between 37% and 64%, the relative benefit increase beyond the was only 11% with antacids, 41% with acid-blocking drugs, and 60% with alginate preparations.

One of my favorite recommendations for GERD and the irritable bowel syndrome is enteric-coated peppermint oil (ECPO). In several double-blind studies, enteric-coated peppermint oil (ECPO) has been shown to be effective in relieving all symptoms of IBS in approximately 70-85% of cases within a two to four week period. In regards to GERD, ECPO works by several mechanisms that ultimately result in lower intra-abdominal pressure as well as possibly helping to eradicate H. pylori – the gut bacteria linked to peptic ulcers. The usual dosage of enteric-coated capsules containing peppermint oil is 1-2 capsules (200 mg/capsule) up to three times daily between meals.

A relatively new natural therapy for GERD is limonene; a compound extracted from lemon peels. Its mechanism of action is similar to enteric-coated peppermint oil. Surprisingly, taking 1 gram just once a week is helpful for many suffering from GERD. The same result may be possible by regular consumption of lemon juice (with peel).

Lastly, DGL (deglycyrrhizinated licorice), a special licorice extract effective in promoting healing of ulcers, is very helpful in relieving any irritation to the esophagus due to gastric acid reflux. Chew one or two 380 mg chewable tablets of DGL twenty minutes before meals.

Continue reading for additional recommendations and natural supplements for the treatment of Gastroesophageal reflux disorder (GERD).

Yasawy MI, Randhawa MA. GERD is becoming a challenge for the medical profession: is there any remedy? Hepatogastroenterology. 2014 Sep;61(134):1623-6.