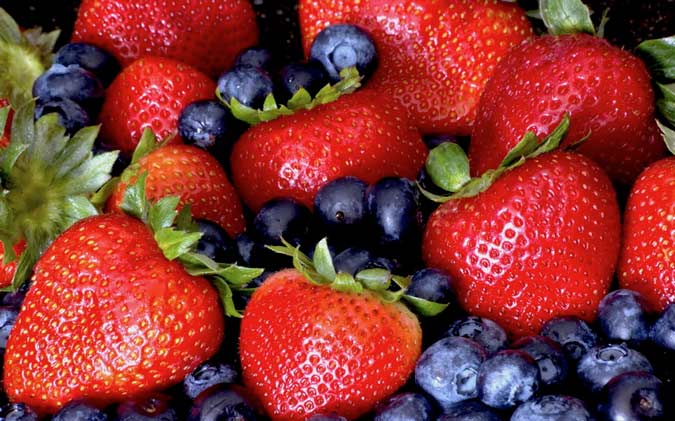 Strawberries and blueberries are rich sources of beneficial plant pigments known as flavonoids. In particular, these berries provide specific types of flavonoids known as anthocyanins, which provide exceptional protection against damage to the lining of blood vessels. Studies are emerging showing a high intake of these berries or other food, beverages, and supplements rich in similar flavonoids is an important step in reducing the risk of atherosclerosis – the process of hardening of the arteries that leads to heart attacks and strokes.

The interest in flavonoids as a heart protective food component was spurred on by researchers trying to explain the “French Paradox.” Because the French consume more saturated fat than people in the United States and the United Kingdom, yet have a lower incidence of heart disease, it is thought that diet may be the underlying reason. Research has focused on red wine consumption. Presumably this protection offered by red wine is the result of its flavonoid components. The consumption of green tea and dark chocolate, like that of red wine, has also been shown in population studies to be associated with a reduced risk for cardiovascular disease.

Data from a massive study known as the Nurses’ Health Study (NHS) II provides additional support for the heart protective effects of a high intake of dietary anthocyanins. In this study, 93,600 women 25 to 42 years of age who were healthy at baseline (1989) filled out food-frequency questionnaires every 4 years. Recent analysis showed that a combined intake of >3 servings a week of blueberries and strawberries was associated with a 34% decreased risk of having a heart attack compared to those consuming the berries once a month or less.

One of the interesting findings was that this protective effect of blueberries and strawberries was noted even in women who otherwise ate a diet rich in other fruits and vegetables indicating the results are likely due to the anthocyanins.

Other rich sources of anthocyanins are thought to provide the same benefits including other berries such as cranberry, bilberry, raspberry, and blackberry; as well as blackcurrant, cherry, eggplant peel, black rice, Concord grape, muscadine grape, red cabbage, and red-fleshed peaches.