Do You Want to Downsize Your Meal? 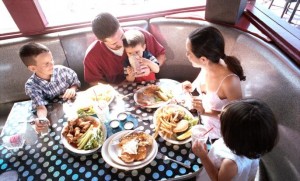 Studies show that calorie postings in fast-food restaurants do little to deter diners from overeating. Two university professors wondered what would happen if restaurant staff simply asked customers if they would like to downsize rather than supersize their meals.

Janet Schwartz, an assistant marketing professor from Tulane University, and Dan Ariely, a behavioral economist at Duke University, conducted three field experiments in Chinese fast-food restaurants in which servers asked customers if they wanted to downsize portions of rice or noodles. The researchers discovered that as many as a third of all diners were happy to limit their portion size if asked. Findings from the research were published in the February 2012 issue of the journal Health Affairs.

The Center For Disease Control and Prevention report that large portion sizes are a key contributor to obesity and research shows the average portion served in restaurants has ballooned during the last decade. In particular, Schwartz said, restaurants pile on inexpensive yet caloric starches like pasta, rice or French fries to persuade patrons that they’re getting a good deal.

Schwartz’s and Ariely’s research encompassed 970 customers who ordered rice or noodles to accompany their Chinese entrée. When asked: “Would you like a half-order to save 200 calories?” between 14 and 33 percent of the diners said yes.

Surprisingly, accompanying the offer with a 25-cent discount didn’t spur any more takers, nor did posting the calorie content of the rice or noodles. In fact, the researchers found that significantly more customers—21 percent versus 14 percent—accepted the downsizing offer without being provided calorie information.

The patrons who opted for the smaller portions also didn’t compensate by ordering more caloric entrees, nor did it change the amount of uneaten food at the end of the meal.

Schwartz hopes the study will help restaurants to understand that limiting portion size won’t alienate customers. “I think the restaurant industry may find this counterintuitive, but it’s an interesting and easy strategy to implement that could help their customers make healthier choices,” she said.