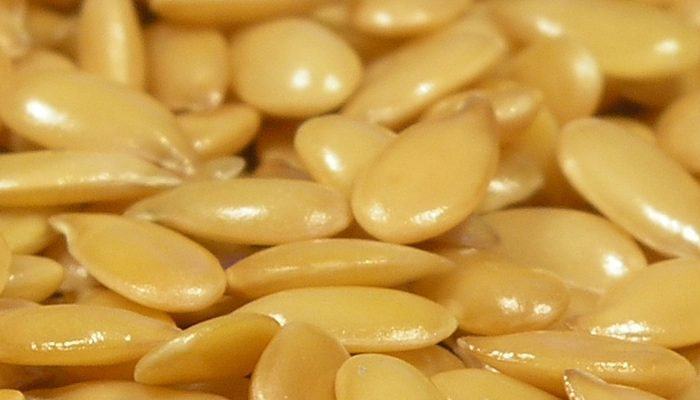 Elevated blood pressure (high BP) or hypertension is a major risk factor for a heart attack or stroke. More than 60 million Americans have high BP, including more than half (54.3%) of all Americans 65 to 74 years of age and almost three-quarters (71.8%) of all American blacks in the same age group.

Drugs to lower blood pressure are among the most commonly prescribed medicines in the U.S. More than 700 million blood pressure prescriptions were filled in 2014. All of the current classes of blood pressure lowering drugs possess significant side effects.

Given the problem with conventional drug approaches to high BP, natural approaches should be emphasized. A new study shows that the simple addition of flaxseeds to the diet produces a potent blood pressure lowering action in people with high BP.

Flax (Linum usitatissimum) is a plant native to the Mediterranean that has been used not only as a food, but also for its fibers, which can be woven into linen cloth for well over 5,000 years. In the 17th century, flax was first introduced and planted in Canada, the country that is currently a major producer of this extremely beneficial seed.

The major health benefits of flaxseeds centers around either their rich content of oil or fiber components known as lignans. Flaxseed oil contains nearly twice the level of omega-3 fatty acids as fish oils – although it is the smaller-chain alpha-linolenic acid rather than the longer-chain fats like EPA and DHA found in fish oils.

Flaxseeds are the most abundant sources of lignans. These components are fiber compounds that can bind to estrogen receptors and interfere with the cancer-promoting effects of estrogen on breast and prostate tissue. Lignans also increase the production of a compound known as sex hormone binding globulin, or SHBG. This protein regulates estrogen levels by helping to escort excess estrogen from the body.

Ground flaxseeds have also been shown to be helpful in improving blood lipid profiles.

A study conducted at the St. Boniface Hospital Research Centre in Winnipeg, Canada, examined the effects of daily ingestion of ground flaxseed on systolic (SBP) and diastolic blood pressure (DBP) in patients with peripheral artery disease. A total of 110 patients ingested a variety of foods that contained 30 g of ground flaxseed or placebo each day over 6 months.

Results included plasma levels of alpha-linolenic acid and lignans increasing 2- to 50-fold, respectively, in the flaxseed-fed group but not in the placebo group. Patient body weights were not significantly different between the 2 groups at any time. The big changes occurred with blood pressure.

While individuals with normal BP showed no effect with 6 months of flaxseed ingestion, those patients who entered the trial with a SBP ≥ 140 mm Hg at baseline obtained an average reduction of 15 mm Hg in SBP and 7 mm Hg in DBP. In other words, this major antihypertensive effect was achieved selectively in hypertensive patients.

The benefits in lowering blood pressure are likely a combination of several nutritional factors in ground flaxseed. The bottom line is that this simple dietary intervention produced one of the most potent antihypertensive effects achieved by any dietary factor.

Flaxseeds can be purchased either whole or already ground or sliced. I prefer purchasing ground/milled flaxseeds as it to enhances their digestibility and therefore their nutritional value. Most of the beneficial research have focused on the use of ground flaxseeds.