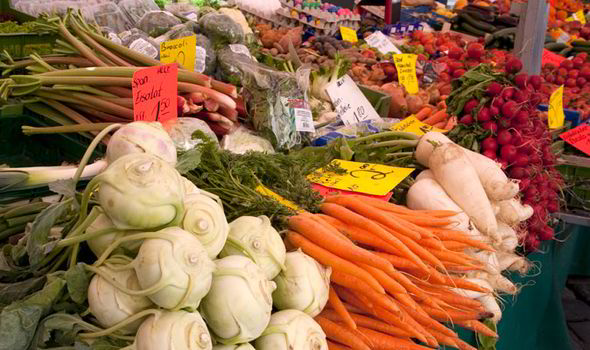 Introduction
Alzheimer’s disease (AD) is a degenerative brain disorder associated with progressive deterioration of memory and cognition. In the United States, Alzheimer prevalence is now estimated to affect about 20% of individuals in the 75–84 years group and 42% people older than 84 years old. These numbers are striking when compared to data from the 1960s indicating an incidence of only 2% in people over the age of 85 years. The tremendous increase in AD in people over 85 years of age is often referred to as the “Alzheimer’s epidemic.”

Background Data
The primary brain lesions of AD are the result of deposits of a substance known as beta-amyloid. Although the immune cells in the brain normally remove beta-amyloid and plaque, research is beginning to characterize a chronic and excessive inflammatory reaction to amyloid proteins in the brain in susceptible individuals that can promote AD.

Genetic factors also play a role. The breakdown of the process to clear beta-amyloid from the brain first involves amyloid binding to apolipoprotein E (ApoE); if beta-amyloid is unbound to ApoE or “free,” it begins to build up and form toxic clusters. There are three forms of ApoE coded for by the APOE gene:

New Data
Results from a new study show that that diet can moderate factors involved in clearing beta-amyloid. The study involved 27 cognitively normal participants and 20 with mild cognitive impairment suggestive of AD. These participants were randomly assigned to 1 of 2 extreme diets:

High fat, high glycemic diet: This diet had a very high glycemic index (greater than 70) and was high in fat. It provided 45% energy from total fat (25% from saturated fat), 35% to 40% from carbohydrates, and 15% to 20% from protein. A typical meal for these participants might include cheeseburgers, soda, and fries.

Low fat, low glycemic diet: Participants in this group ate food with a very low glycemic index (less than 55) and low in fat. This diet consisted of 25% energy from fat (less than 7% from saturated fat), 55% to 60% from carbohydrates, and 15% to 20% from protein. A typical meal in this group was fish, brown rice, and steamed vegetables.

Spinal taps were performed to determine baseline and at the end of the study measurements of total levels of free beta-amyloid and beta-amyloid bound to the forms of ApoE as well as other measurements.

At baseline, the researchers found that those with mild cognitive impairment had a greater fraction of their beta-amyloid in the free state than the participants with normal mental function and that those carrying the genetic risk factor ApoE4 had an even higher level.

The study also showed that the changes in AD-related molecules were inversely correlated with cerebrospinal fluid insulin. In other words, lower insulin levels were associated with higher levels of free beta-amyloid. Insulin is critical for proper brain function for many reasons. With insulin resistance as occurs in obesity and type 2 diabetes, high levels of insulin in the blood result in impairing the transport of insulin into the brain. So, low levels of insulin in the cerebrospinal fluid reflect systemic insulin resistance.

In the normal brain, insulin plays an important role in maintaining synapses and memory. It is little wonder that AD is often referred to as diabetes of the brain and even “type 3 diabetes.”

What all of these results mean, is that in individuals with a low risk for AD, a high fat, high glycemic diet produces the same sort of changes in beta-amyloid seen in those with a genetic predisposition to AD. In other words, dietary habits can nullify the protection that a person’s genetic code can provide.

Commentary
There is considerable experimental evidence that curcumin, the yellow pigment of turmeric, protects against age-related brain damage and in particular, AD. Researchers began exploring this effect after noting that elderly (aged 70-79) residents of rural India who eat large amounts of turmeric have been shown to have the lowest incidence of AD in the world: 4.4 times lower than that of Americans. In test tube and animal studies curcumin has been shown to inhibit beta-amyloid as well as other effects beneficial in AD. Unfortunately, the two clinical trials conducted to date failed to show any benefit. However, the failure to produce positive results may have been due to the poor absorption profile of the curcumin used in the trials. There now exist several products on the marketplace that enhance the absorption of curcumin. Of these, Theracurmin shows the greatest absorption (e.g., 280 times greater than regular curcumin). Currently there is a double-blind, placebo-controlled study underway with Theracurmin in AD being conducted at UCLA.