Celery Seed Extract for Protection Against Alzheimer’s and Parkinson’s Disease? 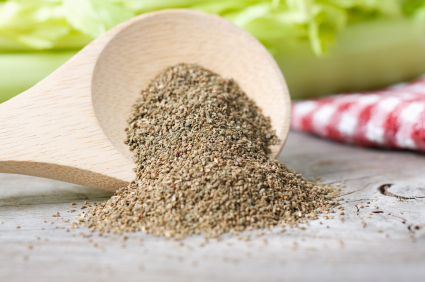 Background
An accumulation of beta-amyloid in the brain is one of the hallmark features of Alzheimer’s
disease. Amyloid is a general term for protein fragments that the body produces normally.
Beta-amyloid is a fragment snipped from an amyloid precursor protein (APP). In a healthy brain,
these fragments are broken down and eliminated. In Alzheimer’s disease beta-amyloid protein
fragments accumulate to form hard plaques between neurons, blocking the transmission of messages
and leading to the death of brain cells and, ultimately, dementia.
Celery Extract
Celery contains a unique compound, 3-n-butylphthalide (3nB), that is both responsible for the
characteristic odor of celery and its health benefits. In animal studies 3nB has been shown to:
• Lower blood pressure by both acting as a diuretic and vasodilator.
• Improve blood flow to the brain, protect against brain cell damage and enhance energy production
within the brain.
• Produce dramatic recovery in neurological and brain function studies that simulate a stroke.
• Significantly increase lifespan in animal studies.
• Exert anti-cancer effects and aid detoxification processes.
• Improve cognitive performance and memory.
Clinical research indicates that celery seed extract appears to be particularly helpful for  sufferers of gout as 3nB
appears to significantly lower the production of uric acid.
New Data
In the animal model of Alzheimer’s disease, 3nB treatment significantly improved learning deficits,
as well as long- term spatial memory. 3nB treatment also significantly reduced total cerebral
beta-amyloid plaque deposition and lowered brain beta-amyloid levels. It was also shown that 3nB
markedly directed amyloid precursor protein processing toward a pathway that precludes beta-amyloid
formation. The researchers concluded “3nB shows promising preclinical potential as a multitarget
drug for the prevention and/or treatment of Alzheimer’s disease.”