An accumulation of beta-amyloid in the brain is one of the hallmarks of Alzheimer’s disease. Amyloid is a general term for protein fragments that the body produces normally. Beta-amyloid is a fragment snipped from an amyloid precursor protein (APP). In a healthy brain, these fragments are broken down and eliminated. In a brain with Alzheimer’s disease, the fragments accumulate and form hard plaques between neurons, blocking the transmission of messages and leading to the death of brain cells and, ultimately, dementia. 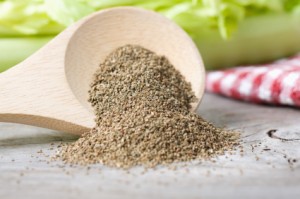 Celery contains a unique compound, 3-n-butylphthalide (3nB), that is responsible for both the vegetable’s characteristic odor and its health benefits. In animal studies, 3nB has been shown to:

Clinical research also indicates that celery seed extract appears to be particularly helpful for sufferers of gout, as 3nB appears to significantly lower the production of the uric acid that causes gout.