Are Sleeping Pills a Dream-Come-True or Nightmare? 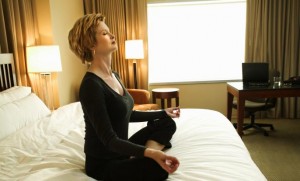 It’s 2 a.m. and you’re staring at the ceiling, begging sleep to come. Again. “Has anyone ever stayed awake forever?” you wonder. And then the advertisements for sleeping pills start dancing through your head. Those people look so well rested! Should you jump out of bed now and run to the pharmacy? What wouldn’t you give for just one good night’s sleep? And how bad can these magical pharmaceuticals be for you, anyway?

Worse than you think.

Most sleeping pills belong to the class of drugs known as sedative hypnotics—a class also used to treat anxiety and stress that includes alprazolam (Xanax), diazepam (Valium), eszopiclone (Lunesta) and zolpidem tartrate (Ambien), among others.

These drugs tend to be quite effective, but those effects come at a price—they carry significant risks. First of all, they are highly addictive and not suited for long-term use. Then there’s the fact that they can cause dizziness, drowsiness and impaired coordination, making them incompatible with activities like driving and other potentially dangerous activities. Combining them with alcohol could be fatal.

Their most serious immediate side effects involve memory and behavior. Because these drugs act powerfully on brain chemistry, they can cause significant changes in brain function, including severe memory impairment, amnesia of events, nervousness, confusion, hallucinations, bizarre behavior and extreme irritability and aggressiveness. They have also been shown to increase feelings of depression, including suicidal thinking.

The dark side of sleeping pills

Daniel F. Kripke, MD, physician and professor of psychiatry emeritus at the University of California, San Diego, worked for more than 30 years assessing the risk of sleeping pills. His findings are stunning. Most shocking: People who take sleeping pills die sooner than people who do not. According to Kripke’s latest study published in the February 2012 British Medical Journal Open online edition, sleeping pills may have been associated with 320,000 to 507,000 excess deaths in the U.S. in 2010 alone.

You read that right. Kripke and colleagues obtained medical records for 10,529 people who were prescribed hypnotic sleeping pills and 23,676 who were not. Over an average of 2.5 years, the death rate for those who did not use sleeping pills was 1.2 percent, compared with 6.1 percent for people with sleeping pill prescriptions. Sleeping pill users also had a 35 percent higher risk of cancer.

Kripke’s research began when he examined data from the very large Cancer Prevention Study I (CPSI), in which more than one million Americans answered questionnaires between October 1959 and February 1960 and were followed up with six years later. The people who had reported taking sleeping pills often were more than 50 percent more likely to have died by the time of follow-up than those who never took sleeping pills.

A likely explanation for the potential negative effects of sleeping pills on longevity is that they actually interfere with normal sleep patterns. Although all of the benefits of sleep are still a mystery, we do know that one of the ways in which sleep recharges the energy within our cells is by removing harmful chemicals from the body—particularly the brain. Sleep functions to enhance antioxidant mechanisms in order to reduce the damage from highly reactive compounds known as free radicals, which can damage our cellular components, including our DNA.

Disturbing the normal rhythm of sleep, as well as impairing the ability to reach the deeper stages of non-REM sleep, have long been known to be a problem with many sedative hypnotic drugs. It’s the main reason these drugs will often produce a morning “hangover” feeling. In contrast, natural sleep enhancers like melatonin, 5-HTP and L-theanine appear to actually increase the time spent in the deeper levels of non-REM sleep, allowing for the brain and body to get fully recharged. In other words, the natural approaches can significantly improve sleep quality.

Given the problems with sedative hypnotics, every effort should be made to avoid their use. Certainly they are not suitable for long-term use for insomnia.

Like other health conditions, insomnia is most effectively treated by identifying and addressing factors that cause it. For example, let’s take a look at the most common form of insomnia: sleep maintenance insomnia. In this form, people are able to get to sleep, but they awaken three to five hours later and have a really tough time falling asleep again. What I have found is that most people with sleep maintenance insomnia suffer from faulty blood sugar control. Basically, these people are on what I refer to as the “blood sugar roller coaster,” and nighttime fluctuations in blood sugar levels cause them to wake up.

Other common causes of insomnia are stress, depression, anxiety, sensitivity to caffeine and certain medications (well over 300 drugs are known to interfere with normal sleep). Elimination of the cause is by far the best treatment.

A number of natural products can help improve sleep quality. The product I often recommend provides a combination of melatonin (3 mg), 5-HTP (30 mg) and L-theanine (200 mg). These three ingredients work together to decrease both the time required to get to sleep and the number of nighttime awakenings. It works extremely well in most people.

In terms of herbal medicine, there is no question that valerian (Valeriana officinalis) is the most popular remedy for insomnia. Recent scientific studies have substantiated valerian’s ability to improve sleep quality and relieve insomnia. As a mild sedative, valerian may be taken 30 to 45 minutes before bed time.

For more additional information on dealing with insomnia naturally, see my article on insomnia and the sleep-wake cycle by clicking here.